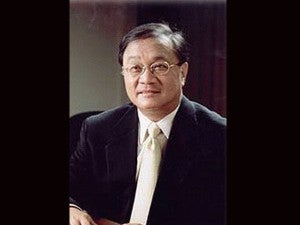 The chairman of Philex Petroleum Corp. said he would abandon a proposed partnership with state-owned China National Offshore Oil Corp. (CNOOC) if the sovereignty or commercial issues involving the disputed Recto Bank are not resolved to the satisfaction of his group and the Philippine government.

“One thing that we will not do is infringe on the sovereignty or breach the laws of this country. So if the terms proposed are not acceptable to us and/or our government, we will simply not proceed,” Pangilinan told reporters after a meeting with Philex Mining Corp. stockholders.

Philex Petroleum is a subsidiary of Philex Mining.

“We are not pushing the case recklessly,” Pangilinan said, referring to the proposed joint exploration deal with the Chinese firm. “I want to assure everybody of that, so that we are not accused of being traitors to this country.”

President Benigno Aquino earlier remarked that he saw “no problem” with the proposed venture with a Chinese party so long as both parties adhere to Philippine law.

Both the Philippines and China are claiming sovereignty over the West Philippine Sea, which includes the oil and gas resource-rich Recto Bank. The prospective deal over the disputed area requires the approval of both the Philippine and the Chinese governments.

Asked whether the Chinese side “understands” Philex Petroleum’s position, Pangilinan said that “they are business people, so I suppose so.”

Pangilinan earlier explained that the partnership with CNOOC could boost financial and technological support for the project and, at the same time, serve to “depoliticize” the concession area.

First Pacific Co. Ltd., the controlling stockholder in Philex Mining, has been comfortably working with the Chinese since it has been based in Hong Kong for some time, he said.

Philex Petroleum holds a 64.45-percent stake in London-listed Forum Energy Plc, which in turn has a 70-percent interest in Service Contract (SC) 72 that covers Recto Bank.

In May, Razon opposed Pangilinan’s plan to bring in a Chinese partner, describing Pangilinan’s travel to Beijing to meet with CNOOC officials as “ill-advised.”

“As the only Filipino-owned company in SC 72, bringing in the Chinese is a colossal sign of weakness and poor judgment,” Razon said. “Discussing the possible resources in Recto Bank is an ill-advised move.”

In April, the Philippines had a standoff with China, this time over Panatag Shoal, another resource-rich reef that falls within the Philippines’ exclusive economic zone, according to Manila officials.

But China insists that the area is part of its territory.

With the Chinese vessels still present in the area, President Aquino has said Malacañang is now considering the option to redeploy Philippine government vessels to the shoal.

Read Next
PH banks’ credit profile on the rise, says watchdog
EDITORS' PICK
Japan brings back virus restrictions over Omicron surge
Gear up and get ready to play with Yamaha Mio Gear
Over 3 Million worth of prizes to be won at Smart Padala’s SENDali Manalo Promo!
Uproar over no vax, no ride policy: Maybe it’s time for gov’t to say sorry—Bello
97% of COVID-19 beds at PGH currently occupied
Acer starts the year off strong with the Aspire Vero National Geographic Edition
MOST READ
1Sambayan names 7 aspirants in its 2022 Senate lineup
Emma Stone calls Andrew Garfield a ‘jerk’ after he ‘lied’ about his ‘Spider-Man: No Way Home’ appearance
Guevarra to Acosta: Obey rules on unvaccinated
PH to import 60,000 tons of fish to cover shortage
Don't miss out on the latest news and information.