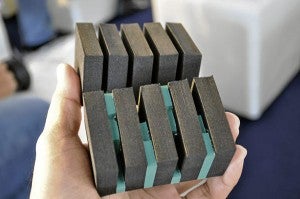 THESE mock-ups show how the Energy XM2 with Alternative Bridging Technology (the green filling) looks like to one without. Photo by Charles E. Buban

Pattaya, Thailand—For most of us, tires are the last thing that we would consider when looking at a vehicle for its fuel efficiency as well as performance.

Too often, we are so charmed about its engine, its aerodynamic body shape and even the high-tech devices that come installed that we often overlook the tires that are in fact, crucial considering they are the only part of the vehicle that are constantly in direct contact with the road.

After all, what good is a fuel efficient engine if they are paired to tires that have so much rolling resistance (the amount of force required to power a tire forward)? What good are all the advanced technologies in a car if it will only veer out of control because the tires failed to grip the pavement during a hard turn?

We should never take tires for granted, a message French tire manufacturing giant Michelin imparted in launching the Energy XM2 range of tires in this coastal city 147 kilometers southeast of Thailand’s capital, Bangkok.

Designed specifically for compact and mid-sized passenger cars (hence, the sizes to fit 14 to 16-inch wheels), the Energy XM2 targets the mass market, a fast growing segment that requires the highest level of safety for the lowest total cost of ownership.

“It’s a tough balancing act but Michelin is able to deliver with the Energy XM2: It delivers 20 percent more mileage compared to the average of leading competitors (meaning less frequent tire replacements), improved fuel saving compared to its predecessor (the Energy XM1) thanks to a 10 percent reduction in rolling resistance), and more importantly, improved tread grooves to evacuate up to 20 percent more water compared (again, compared to the Energy XM1),” announced Pierre Azemat, product marketing manager for Michelin Southeast Asia and Oceana.

To achieve these extraordinary features in the new tire, Michelin designed the Energy XM2 to have Alternative Bridging Technology that reinforces the rigidity of tread blocks. With rigidity enhanced, the tread blocks move less, reducing the rate of tire wear. 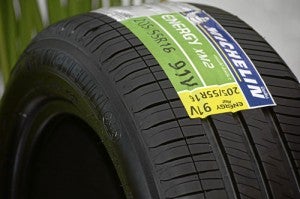 Micro-adaptive compound makes the tread of the Energy XM2 more flexible to better adapt to irregularities in the road surface and thus, provide a much better grip.

The tread grooves of the Energy XM2 was also designed to evacuate up to 20 percent more water compared to its predecessor, the Energy XM1. A higher volume of water evacuated at a faster rate lowers the risk of aquaplaning.

“With less heat generated, less energy is lost, which results in an 8 percent reduction in rolling resistance and additional fuel savings of 1.1 percent,” explained Tony Menard, marketing director for Michelin Southeast Asia and Oceana who added that in developing a tire for the mass market, their primary objective was to ensure safety before doing anything about the tire’s longevity and impact on fuel efficiency.

Every Energy XM2 tire also has the Green X marking, a sign that the tire has met the high rolling resistance standards set by Michelin. As explained by Azemat, the Green X marking is a sign of Michelin’s commitment to reducing fuel consumption and CO² emissions, whilst maintaining longevity and safety.

Each year, Michelin invests $714 million just on research and development and the unique technologies used in the Energy XM2 are the result of our pioneering efforts in the alternating bridging technology that enables our product to deliver greater level of longevity, fuel saving and safety,” said Azemat.

Read Next
Jeeps gone wild
EDITORS' PICK
Pru Life UK receives four golden arrows for solid corporate governance
Malls adjust ‘NCR Plus’ operating hours for April 12-30 MECQ
Speed up your game with the new vivo Y20s [G]
Pre-order the new vivo Y20s [G] to get a free TWS earphone
‘NCR Plus’ to be under MECQ starting April 12 until April 30 — Palace
Metro Manila to have shortened curfew hours from 8 p.m. to 5 a.m. under MECQ
MOST READ
Stop ‘creeping occupation’ of ‘militia’ boats in WPS, Pacquiao asks China
Bea Alonzo clarifies status of her relationship with Dominic Roque
Convicted former aide of Sen. Bong Revilla dies — BuCor
Locsin to China: ‘Then move out’
Don't miss out on the latest news and information.