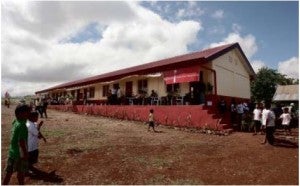 One hundred years on, the soda company still dominates a significant share of the market not only for its flagship brand, but also with its diverse product portfolio.

According to Guillermo Aponte, president and general manager of The Coca-Cola Export Corp., the Philippines is among the top 10 countries in the world when it comes to Coca-Cola volume sales.

“It used to be the largest but China and Japan have overtaken it,” he says.

Coke has launched a number of activities to mark its centennial celebration in the country. It recently held the Coke ng Bayan concert, introduced the President of Happiness Project, and launched various corporate social responsibility projects.

“Corporate social responsibility is one of the most important elements of this celebration,” Aponte says. “I take it very personally because I believe that we have a mission as a company-worldwide and in the Philippines.”

Aponte enumerates the four pillars or “core” of their projects that best signify the company’s philosophies: education, entrepreneurship, environment and nutrition.

“Our company connects with the needs of the consumers and society,” Aponte says. “We do these projects for the society to be better. We say thank you for giving us the opportunity to serve consumers in many ways and for making the brand what it is today.”

Caring for the youth

Coke, through the Coca-Cola Foundation, is one of the first companies to address the country’s classroom shortage with its Little Red Schoolhouse Project. It recently turned over its 90th school to the local government of Bukidnon in Mindanao. The company is looking at completing 100 classrooms by the end of this year, also as part of its centenary celebrations.

The Coca-Cola Foundation launched the Little Red Schoolhouse project in 1997, in partnership with the Department of Education and the Philippine Business for Social Progress, one of the largest social responsibility networks in the country.

“We choose (far-flung) areas where there is the most need for classrooms,” says Gilda Maquilan, The Coca-Cola Export Corp. corporate communication manager.

About 60,000 schoolchildren and more than 3,100 teachers have benefited from the endeavor. A total of 240 classrooms in 88 schools nationwide, products of the Little Red Schoolhouse project, come complete with electricity, running water, furniture and basic necessities.

Aponte also relates how Coca-Cola has partnered with DepEd with the TEN (The Entire Nation) Moves project, which aims at completing 10,000 classrooms in 10 months.

For the NutriJuice Intervention program, Coca-Cola partnered again with DepEd, the Department of Health and the Department of Science and Technology Food and Nutrition Research Institute (DoST-FNRI). NutriJuice is a product of DoST-FNRI and Coca-Cola’s collaboration to come up with a nutritious drink that would help eradicate iron-deficiency anemia among young children in less privileged areas.

The orange-flavored juice drink is fortified with iron, zinc, lysine, and vitamins A and C.

“We choose an area and supply them with NutriJuice every day for six months,” Aponte says.

For the Agos Ram Pump Water Project, Aponte says that the company wants to tap what he calls “ancient” technology to pump up large volume of water to upland communities where clean water is scarce. The ram pump can run automatically for 24 hours a day, has a zero carbon foot print, and can be fully operational in six weeks. Ram pump systems are capable of providing 100,000 liters of water per day to communities given that there are ample sources of water from the lowlands.

“This project uses the natural kinetic energy contained in free-flowing water and bring them to upland areas,” he explains.

The company also had almost similar projects in the past such as harvesting rain. “We believe that this (ram pump) is the project for us,” he says.

Aponte says that Filipino women are the driving forces behind the Coca-Cola business. He notes that most sari-sari (variety) store owners are women. As part of Coca-Cola worldwide efforts in “economically empowering five million women” all over the globe, the Philippine company piloted the Coca-Cola National Convergence Program on Empowering Grassroots Women Entrepreneurs in Palawan last year.

According to Maquilan, the company chose the southernmost part of the island to arm the women with skills on entrepreneurship. Again, Coca-Cola forged a partnership with Technical Education and Skills Development Authority (Tesda), local government units, micro-finance institutions, and non-governmental organizations to conduct seminars and workshops on business management, operational training and financial planning to women entrepreneurs across the Philippines.

“We are pleasantly surprised at the number of women (300 in 10 cluster sites) who participated in the pilot program,” Maquilan says. “We had to admit sari-sari store owners who don’t carry our products yet.”

This year, the program hopes to impact 10,000 women business owners.

“This is a country where women play a very important role,” Aponte says, “and the company feels that we can do something to further empower them with this program.”

Coca-Cola operates in 200 countries and records a rate of 1.8 billion servings a day of its sparkling beverages, ready-to-drink coffees and juice drinks.