World-class guns made in PH 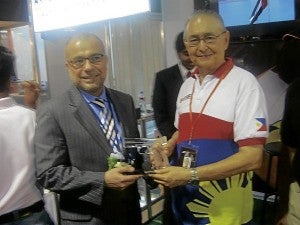 Given the sad state of the country’s military and police forces in terms of equipment and weaponry, the average man on the street can probably be forgiven for not knowing that world-class small arms manufacturer actually exists in the Philippines.

But “world class” is exactly what the country has in the form of the Arms Corporation of the Philippines, or more popularly known among gun enthusiasts around the globe as “Armscor.”

“Our products are sold in 60 countries now,” says Armscor chair Demetrio “Bolo” Tuason, detailing the company’s long list of rifles, pistols based on the popular 1911 format (known colloquially as the “45”) and a wide range of ammunition.

From its humble beginnings as a backyard manufacturer of .22 caliber ammunition, the company now employs some 1,200 people including some of the country’s best gunsmiths.

Tuason recalls, however, that the company started as Squires Bingham manufacturing in 1952 when it first obtained a license to manufacture firearms and ammunition from President Ramon Magsaysay.

(Squires Bingham, itself, has been in existence since before the Second World War as a dry goods seller. It was bought by the Tuason family patriarch from its American founders in 1941.)

“We had a small operation in España Extension (now E. Rodriguez Sr. Ave. in Quezon City),” he recalls. “It was a small warehouse then, because Squires Bingham was a department store. At that time, there was nothing in that area.”

The company relocated its operations to Marikina City in 1958, where its 7-hectare manufacturing facility now stands.

Tuason—who is a second generation family member to run the business, having taken over the reins of the firm in 1969 from his father, Don Celso— says there is a world of difference between the company he inherited decades ago with the one he runs now.

“We now make .22 caliber rifles, we make 12-gauge shotguns, revolvers, and pistols which we started [making] in the late 1980s,” he says.

Armscor’s flagship 1911 pistol (named thus because the original design was made by its original US manufacturer, Colt, in the year 1911) is so popular that the company makes and sells an average of 7,000 units a month. 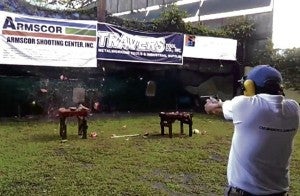 A target shooter sends a watermelon to kingdom come.

“Most of these pistols are made for export,” Tuason says, adding that its products are most popular in the US, where a Nevada-based distributor sells them to gun stores and enthusiasts around North America.

“Overall, we sell over 100,000 guns each year across all product lines,” he says. And that’s just the firearms division. Another unit within the company takes care of the ammunition business, whose products are also in demand both locally and abroad.

So well known and reputable is the firm overseas that Armscor was chosen by Italian precision firearms manufacturer Tanfoglio—a favorite brand of target shooters worldwide—as its partner for the Philippines.

From this partnership, Tuason explains that Armscor learns valuable manufacturing and quality control techniques which allow the company to compete toe to toe with more popular firearms makers overseas.

The company, at present, is an unqualified success, but Tuason has—by this year—already spent 50 years running Armscor. He says it is time to turn over the reins of the company to its next leader chosen by the board of directors after a long evaluative process: his son, Martin.

The “change in command” is set to happen by yearend, after which the elder Tuason will likely be named the firm’s chair emeritus.

Bolo describes his son as someone who is prepared to take Armscor to the next level, although he concedes that the younger Tuason, perhaps because of his relative youth, is more aggressive in his business plans than his predecessors of the previous generation.

In particular, the company is looking to grow its firearms export business further. In the past, its sales were split 50-50 between the domestic and international markets, but at present, exports already account for 60-70 percent of sales, Tuason says—something that will likely rise under his son’s stewardship.

“I have not sacrificed the domestic market,” he says, but adds that demand from abroad is simply growing at a much faster pace owing to the popularity to the firm’s products. 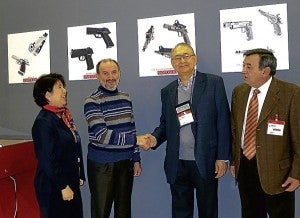 The weapon looks exactly like the 1911 “45” pistol, but is chambered for the much smaller .22 caliber round.

“It is a small bullet that performs like that of an Armalite,” says Bureau of Internal Revenue chief Kim Jacinto-Henares, herself a gun enthusiast. “The bullet flies at over 2,000 feet per second so the force of impact is very strong despite its small size.”

Indeed, several videos uploaded on Youtube show the Armscor .22 TCM (which stands for Tuason Craig Micromagnum) being fired at a watermelon…and the watermelon exploding and disintegrating a split second later.

“The bullet is comparable to a 5.7 FN,” says Tuason, describing ammunition for a pistol used by elite military units abroad. “It’s so in demand that we have a several months’ worth of order backlog.”

As he gets ready to turn over the helm of the country to his son, Bolo Tuason has high hopes for his firm and the shooting industry in the Philippines.

He notes, for example, that the fact that President Aquino is a gun enthusiast has elevated the profile of the sport and made shooting a more popular activity in the country.

More importantly, Tuason says that Armscor helps showcase to the rest of the world that a Filipino firm can survive and thrive in an extremely competitive and cutthroat industry like firearms manufacturing.

“It is—and will remain—a good business to be in,” he says.

Read Next
TV5 losses double to P4.1B in 2011
EDITORS' PICK
COLUMN: Making the republic work
Ahead of ONE: Full Blast II, Mongkolpetch warns Elias Mahmoudi: ‘Watch out for my fists’
COVID situation still ‘very fragile’ due to surge in regions – DOH
Kai Sotto continues to inspire Filipinos by sharing his passions and stories with Smart Prepaid
1Sambayan names 6 choices to pit vs Duterte’s annointed in 2022
Alex Eala wins Grand Slam on Independence Day: ‘I hope I made my contribution to the country’
MOST READ
1Sambayan bares nominees for president, vice president in 2022 polls
1Sambayan names 6 choices to pit vs Duterte’s anointed in 2022
Nancy, Isko asked to pull out of 1Sambayan nomination, says Carpio
PH to launch biggest satellite in 2023
Don't miss out on the latest news and information.