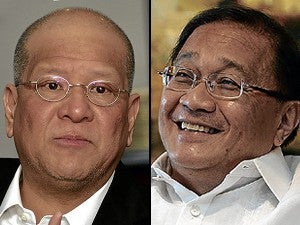 Amid the annual who’s-in-who’s-out hubbub created by the release of the Forbes list, two very prominent names in the local and regional business scenes were—to many observers—incredibly absent from the Philippine billionaires’ roster.

Nowhere to be found on the list of the country’s 40 richest individuals are tycoons Ramon S. Ang (RSA) and Manuel V. Pangilinan (MVP) who have been engaged in recent years in a friendly (they claim) competition to outdo each other in buying up whatever company is for sale, both here and abroad.

The common explanation for the absence of “RSA” and “MVP”—as both men are known in the business community—from the Forbes list year in and year out is the fact that both men, as heads of their respective conglomerates, are “mere employees.”

But interviews made by the Inquirer with business associates and longtime observers of the dynamics of Philippine business reveal that the absence of both corporate titans, indeed, exposes one of the biggest weaknesses of the celebrated roster.

“Mere employees? Nothing can be further than the truth,” said one businessman familiar with the corporate structures of Ang’s San Miguel Corp. and Pangilinan’s PLDT group.

“For the list to be accurate, they should be high on the Top 40 list of Filipino billionaires,” said the businessman, requesting anonymity. “Very high.”

He explained that both Ang and Pangilinan had, in fact, “very creative methods” of keeping their wealth from public view, including structuring their ownership in various corporations through several layers of ownership in holding companies.

“If you were to pierce the veil of ownership in the various firms they work for, you will find that they actually have bigger stakes than what people think,” he said. “It’s not illegal, just creative.”

Meanwhile, observers have also noticed the growing number of Chinese-Filipino taipans and would-be taipans on the Forbes list in recent year, gradually easing out the Spanish mestizo families that have dominated the local business scene over the last century.

“[The Chinese-Filipinos] took on the biggest challenges and did not mind losing along the way,” he added. “They also ignored the many insults and hurts.”

Indeed, the most aggressive groups in the local business scene of late have been the likes of Henry Sy Sr.’s SM group, the Ang-controlled San Miguel, airline and mall magnate John Gokongwei Jr. and property tycoon Andrew Tan.

In contrast, the flagship firm of the Zobel family—Ayala Corp.—has opted to maintain its tried and tested conservative business practices, serving it well for over a century.

Amid all this, there are some people on the Forbes list who are actually not pleased to see their names on it.

One such person is Petron Corp. president Eric Recto who, for the second year in a row, is protesting his inclusion on the list.

Valued at $365 million by Forbes and ranked 24 on the list, Recto said Forbes’ method was inherently flawed because the magazine counts only people’s assets, and excludes liabilities “which they have no way of finding out.”

“I’ve written them already to point this out,” he said in an interview with the Inquirer, explaining that Forbes’ rankings are mainly based on the valuation of stocks that the tycoons own—a method that he calls “simplistic” since it fails to capture personal assets as well as personal loans, or the circumstances of business concerns that are not listed on stock exchanges.

9 dead, 6 arrested in series of raids in Calabarzon