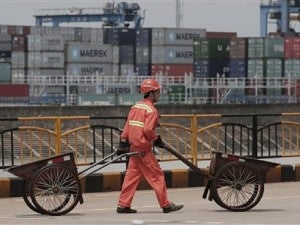 The banking giant said preliminary figures from its closely watched purchasing managers’ index (PMI), which gauges the manufacturing sector, fell to 48.1 in June from 48.4 in May on shrinking exports and weak domestic demand.

The June figure also marked the eighth consecutive month that manufacturing has contracted. A PMI reading above 50 indicates expansion, while a reading below 50 points to contraction.

“With external headwinds remaining strong, exports are likely to decelerate in the coming months.”

New export orders, a component of PMI, recorded their sharpest decline since March 2009, HSBC said, but did not give a figure. The bank will release the final data for June next month.

China’s commerce minister said earlier this month that the country faces a “severe” trade situation this year, as weak demand in key exports markets such as the United States and Europe hit the economy.

In May, exports were better than expected, rising 15.3 percent year on year to $181.1 billion, but analysts say such growth may be short-lived.

In a further worry for the economy, weaker prices and a contraction in new orders suggested domestic demand is also flagging, Qu said.

“We expect more decisive policy stimulus to reverse the growth slowdown,” he said.

China on June 8 cut interest rates for the first time in more than three years in a bid to boost the economy, while the government has also trimmed the amount of cash banks must keep in reserve three times since December, most recently in May.

“China will likely speed up loosening monetary policy in the future, with the magnitude depending on the situation with the eurozone debt crisis and the recovery in the US economy,” Liao Qun, chief economist at Citic Bank International in Hong Kong, told AFP.

China’s economy grew an annual 8.1 percent in the first quarter of 2012 – its slowest pace in nearly three years. The government will release the gross domestic product figure for the second quarter on July 13.

The government has reduced its economic growth target for this year to just 7.5 percent, down from 9.2 percent for all of last year and 10.4 percent in 2010.

Japan’s Nomura on Thursday repeated its forecast that China’s GDP growth will slow to 7.8 percent in the second quarter this year.

“Underpinned by increasingly accommodative monetary and fiscal policies, China’s economy is in the process of bottoming out,” Nomura’s Hong Kong-based economist Zhang Zhiwei said in a research report.

Chinese stocks fell after the release of PMI, with the benchmark Shanghai index down 1.59 percent in the afternoon.