DOH to distribute P500M worth of pills, condoms 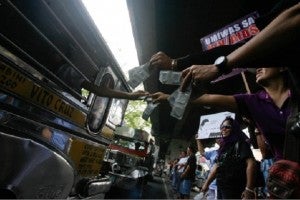 The Department of Health (DOH) on Monday said it would be distributing this year some P500 million worth of contraceptives, including condoms and birth control pills, as part of its renewed effort to reduce the rising maternal mortality rate (MMR) in the country.

The MMR, said Ona, is an important indicator of the government’s performance in improving the health of its citizens.“We can only say that the entire health system is improving if the maternal mortality rate is also improving,” he said.

Ona cited the poor delivery of health services to impoverished communities as one of the main causes of maternal deaths which he described as highly preventable.

“Hence, we need to pass the reproductive health bill now, amend the midwifery and other health professions law, as well as consolidate local health systems at the provincial level,” the health chief said, adding that doing so would also help the country meet its Millenium Development Goals (MDG), the global set of targets for reducing poverty.  As part of its MDG, the Philippines has committed to whittle down its MMR to 52 per 100,000 live births.

Ona described the latest statistics as “alarming but not surprising” since health services across the country have been neglected for the past 10 years.  He noted that government support for the family planning program had also been very limited over the last decade, resulting in some six million Filipino women having unmet needs for modern family planning services.

The health secretary said that investments to upgrade health facilities had only started pouring in two years ago, and that  some five million poor Filipinos had yet to enroll in PhilHealth to avail themselves of its benefits.

The Philippine Daily Inquirer sought comment from the Catholic Church’s Episcopal Commission on Family and Life on the DOH plan to distribute contraceptives and condoms, but its calls and texts went unanswered.

The commission has openly denounced the distribution of condoms and pills to Filipino couples, which is among the provisions in the controversial RH bill pending in Congress.

While the country has yet to meet its goal of curbing maternal deaths, the DOH said that child mortality had been successfully reduced from 32 to 30 deaths per 1,000 live births.

“This moves the Philippines closer to meeting its MDG of 27 deaths per 1,000 live births,” the DOH said. “This can be attributed to the sustained efforts in child health programs such as immunization,” it added.

To further trim the number of mothers dying in child birth, the DOH has allocated P868 million for the deployment of health teams to communities to bring health services and P6 billion to improve government-owned clinics and hospitals.