‘Father of construction’ continues to build with passion 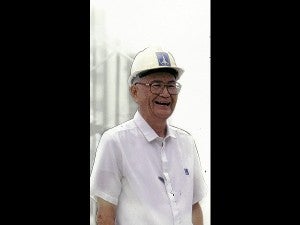 David M. Consunji is a “builder” first and foremost.

Although the 90-year-old construction magnate has successfully made a mark in the local real estate industry that he is now heralded as the father of contemporary construction industry, Consunji continues to stress that he is a builder, who derives satisfaction not from making money out of his projects, but from putting up structures and real things that brought real benefits to other people.

It was this passion that enabled Consunji to give the Philippine construction business a whole new meaning, transforming the industry from being just an occupation or a livelihood to a passion, a calling.

“One must love his work and be proud of it, and this, combined with hard work, will allow him to achieve skills and work quality,” says Consunji in an exclusive interview with Inquirer Property.

But what really tested his mettle and his dedication to be a builder happened when he was about to start his business: when he bought a one-bagger concrete mixer (sometime in 1949) for P500, as Consunji then believed that to be a builder, he must have a concrete mixer.

While the mixer was being refurbished, a prominent builder offered him P3,500 for the mixer, which was five times the value of what he originally paid. Though a tempting offer, Consunji decided to keep the mixer instead as this was his tool to build, adding that if he sold the mixer, he would only earn once and may miss out on the opportunities that lay in the future for him.

That was, according to Consunji, a defining moment because then, it was no longer a question of financial gains.

To quote his memoir: “To me, accepting [the] offer would have been like a violinist or a flutist selling his instrument—treating it like a commodity to buy and sell. And of course, that would be unthinkable for a genuine musician. The concrete mixer was my equivalent of a violin. It was the tool which formed the basis of my calling.” 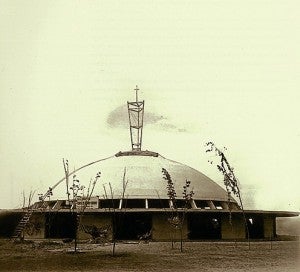 THE CHURCH of the Holy Sacrifice was completed by DMCI in the mid-’50s.

Consunji recalls that prior to starting DM Consunji Inc., he apprenticed “for four months without pay to be a builder, gradually learning about real estate and land development.”

He credits his cousin Ricardo Consunji, who had 10 years of experience in the construction industry ahead of him, for teaching him the rudiments of the trade—how to make an estimate, how to make a summary of items of work for a project, how to prepare for a bid and how to manage the construction projects.

By 1950, Consunji finally made a life-changing decision: to “do construction work on my own.”

During the early ’50s, the company, a sole proprietorship that started off as David M. Consunji Civil Engineer Contractor, has begun bidding and taking on contracts, the first of which was for a timekeeper’s booth of oil firm Stanvac (now known as ExxonMobil), to be followed with the construction of chicken houses for a government agency.

It was only in 1954 that the company was incorporated to become DM Consunji Inc., and the rest, as they say, is history.

DM Consunji Inc. was then at the forefront of shaping the Makati Central Business District since the ’60s, building the old Monterey Apartments, the Rizal Theater, and Tower One and Exchange Plaza. The company also built the Shangri-La Hotels in Makati, Mactan and Boracay, Manila Hotel, The Westin Philippine Plaza, the Asian Hospital Medical Center, among other distinct landmarks.

The enterprising visionary in Consunji led to successful joint ventures and forays in other sectors, including its partnership with Metro Pacific Investment Corp. for the Maynilad Water Services Inc., the west zone water concessionaire in Metro Manila. 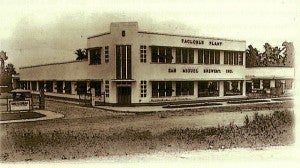 THE COCA-COLA plant in Tacloban is Consunji’s first big contract.

DMCI Power Corp. is meanwhile engaged in the design, construction, investments and operation of power plants, operating subsidiaries, namely: the Sem-Calaca Power Corp. and the Masbate Power Corp., which began operations this year.

DMCI Homes, established over a decade ago, has already dominated its category of resort-inspired residences. The company has also successfully expanded its portfolio to include house and lots, and high-rise condominium units.

The successes now still being enjoyed by DMCI and all its subsidiaries and affiliates indeed speak highly of the accomplishments of Consunji, who have poured all his passion in the art of building these landmark structures and building up people’s own successes.

And his accomplishments did not go unnoticed as the visionary founder earned various accolades from the construction and engineering sectors both here and abroad.

The key to his success is no secret, for Consunji would openly say that the many different elements that make a strong and sound structure would include concrete and steel, hard work, honesty and dedication.

“Property development is a lifelong venture into the future of land use and construction. Skills and integrity plays an important role. [For] me, a quality structure is something to be admired and learned from. The quality structures that we build serve as milestone in the struggle of humanity for better structures,” Consunji says.

“I would like to feel that somehow DMCI has been one of those who improved our standards of project completion through improved quality. I am hopeful that DMCI shall be remembered as among the builders who contributed to the quality of our structures,” he concludes.