For this family, producing choco tablets is a bitter-sweet success 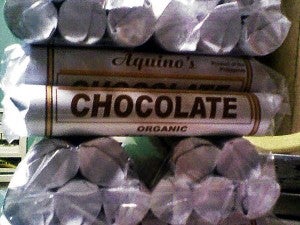 A STACK of chocolates ready for selling.

CALASIAO, PANGASINAN—“Save the Earth, it’s the only planet with chocolates.”

This phrase, a part of a letter circulating in the Internet and social media, shows that chocolate is a favorite among citizens of the world, and that it may move people to save the planet.

But selling chocolate needs no catchy phrase at all. Almost everyone loves it and a family producing chocolate tablets in this central Pangasinan town knows this so well.

For almost 60 years now, the surname Aquino is synonymous with chocolate tablets that are usually prepared into chocolate drink.

Rose Aquino Terrado, 59, says their father, Federico, started the home-based business after working as a kitchen helper for a priest here in the 1950s. Federico grounded cacao seeds and cooked them, a brew that he served on the priest’s breakfast table.

When the priest died, Federico thought of producing chocolate tablets and sold them initially to his neighbors and later in other villages.

“He would walk several kilometers away, lugging a bag of chocolates to sell from house to house. That was how the Aquino surname became known for this chocolate,” Terrado says. 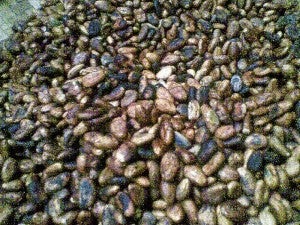 When the 10 Aquino siblings were young, they helped their parents in making chocolate tablets, in the process learning the business.

They continue producing chocolate tablets in the family compound on  W.A. Jones Street here and maintain production areas in their respective houses.

The business remained home-based through the years, with no large, modern machines cooking chocolates and churning out neatly packaged products. The Aquinos’ yards and living rooms served as work areas.

Andres Aquino, 73, the eldest, says preparing cacao seeds into the tablets ready for cooking into that favorite brew is a long and difficult process. 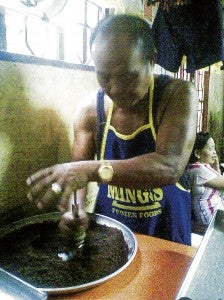 First, the seeds are roasted until the skin loosens. These are then winnowed to separate the skin. The seeds are grounded in a mechanical grinder until a paste-like consistency is achieved.

The chocolate paste, added with sugar, undergoes another grinding, manually this time, to attain a soft and smooth texture. The mixture is then formed into tablets.

Andres’ wife, Lydia, 71, says they still follow a procedure passed on by her father-in-law to his children and maintain the ratio of cacao and sugar in the product.

She says some customers request sugar-free chocolate tablets or those sweetened with artificial sweetener. Some also want peanuts added to the tablets.

The Aquino name has become a sort of “brand name” for locally produced chocolates because at least three generations have been involved in the industry. Andres and Lydia’s son, Joselito, now manage the business.

“Our customers, who were buying our chocolate tablets when we were young, continue to patronize our product. Their children also buy our products. Whenever our regular customers who now live abroad come for a vacation, they would buy packs of chocolate to bring back to their friends and relatives. But we have new customers too, mostly Chinese-Filipinos,” Terrado says.

She says their father, when he started the business, bought cacao seeds in central Pangasinan, mostly in San Carlos City and Mangatarem and Aguilar towns. 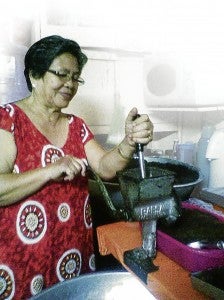 “There were plenty of cacao trees there during those years. But there was a year when a river dike in Bayambang town was washed out by floods and cacao trees there died. The owners no longer replanted, which is bad because cacao grown in Pangasinan is delicious,” she says.

She says she planted 200 cacao seedlings in Manaoag town but only 50 survived. She is encouraging relatives in Malasiqui town to plant cacao in hilly areas, where floodwaters can’t reach them, because cacao trees die when these are exposed to too much water.

Andres says they buy their cacao seeds in the Divisoria market in Manila. These cacao seeds are harvested in Isabela and Davao. They also tried using cacao grown in Baguio City.

For the Aquinos, producing chocolate tablets gave them a bitter-sweet success. It has not made them rich, they sau, but it has made life a little easier and helped send their children to school.