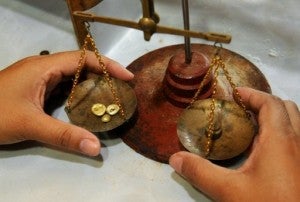 In this photo taken on September 20, 2011, gold nuggets are weighed in the Philippine gold rush site of Mount Diwata in the country's strife-torn south. Despite rising metal prices worldwide, the amount of gold traded in the country plunged by 92 percent in the first quarter of 2012, and the Department of Environment and Natural Resources blames smuggling for this. AFP PHOTO / JAY DIRECTO

MANILA, Philippines—Despite rising metal prices worldwide, the amount of gold traded in the country plunged by  an unbelievable 92 percent in the first quarter of the year, leaving the Department of Environment and Natural Resources (DENR) to wonder where the precious metal all went.

From 7,493 kilograms of gold worth P14.11 billion purchased in the same period in 2011, the gold purchases of the Bangko Sentral ng Pilipinas (BSP), the only authorized agency to buy and sell gold, went down to a dismal 618 kilograms worth P1.35 billion in the first quarter, the DENR reported.

“Given the continuing high price of gold and the increasing number of small-scale mining areas, the decrease in gold purchases by the BSP clearly means that the gold output is going to the blackmarket and smuggling,” Environment Secretary Ramon Paje said.

He said the Presidential Anti-Organized Crime Task Force should investigate this.

Although the gold output has been declining in 2012, it has so far been markedly higher than the quantity brought to the BSP, the DENR said. In the first quarter of 2012, the DENR said actual gold production plummeted by 65 percent to 4,056 kg, with the value dropping by 57 percent to P9.33 billion.

Paje said the taxes imposed by the Bureau of Internal Revenue on gold trade in 2011 may have led gold buyers and sellers to trade underground or smuggle it abroad. This way, they could avoid paying the two percent excise tax and the 10 percent creditable withholding tax to the government.

Prices of gold and silver were up by 21.95 percent and 2.68 percent, respectively. The yellow metal traded above the $1,600 per troy ounce level, the highest of which was $1,743 per troy ounce recorded in February 2012, according to the DENR.

DENR officials said it has been difficult to track actual production of gold, which was mostly mined by small-scale miners. MGB Director Leo Jasareno said they mostly relied on gold data from the BSP and the reporting from established mines.

With the global economy still floundering, gold is seen as a safe haven for investment.

The DENR said it expected greater gold volumes in the coming quarters as big mining companies have been set to operate in various parts of the country.