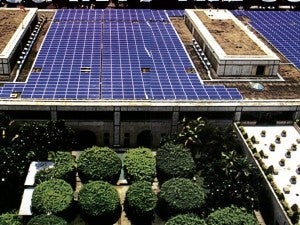 Ironic that in a country like the Philippines, where the sun practically shines for the most part of the year, solar power is barely harnessed.

Owing to what critics claim as the high cost of solar panels, the growth of this particular industry has rather been stunted, unfortunately, much to the detriment of the Filipino people who could have gained much benefit from the power of the sun.

Recently however, a Manila-based multilateral lender decided to “walk the talk” and lead the way to show both believers and critics how harnessing solar power can be an economically viable business and environment case at the same time.

“Using rooftops and other open spaces is an efficient way for businesses and homes to capture and use the energy of the sun,” S. Chander, director general of ADB’s regional and sustainable development department said in a statement.

“We hope other companies will follow ADB’s example,” he added.

According to the ADB, the solar rooftop project was supported by Philippine government agencies such as the Department of Energy, the city government of Mandaluyong, Civil Aviation Authority and Department of Environment and Natural Resources (DENR) and the Manila Electric Co. (Meralco).

It consisted of 2,040 photovoltaic panels occupying 6,640 square meters on the roof of ADB’s main building. These solar panels have a capacity of 571 kilowatts and can generate 613 megawatt-hours of electricity per year.

This capacity, which can provide enough energy for 245 families as the average household in Metro Manila uses 2,500 kilowatt-hours (kWh) yearly, consisted only less than 4 percent of ADB’s electricity consumption. In particular, the solar rooftop project will allow ADB to generate its own electricity to run a portion of the banks’ air-conditioning, lighting and computer systems.

The ADB stressed that solar energy is attractive for a number of reasons, but one of the most compelling is that it has zero fuel cost—which  means reduced carbon footprint and lower greenhouse gas emissions.

“This solar installation demonstrates that with innovative solar products and collaboration among bankable partners, solar can provide a cost-effective solution for electricity generation across Southeast Asia,” added Zhengrong Shi, chief executive officer of Suntech, which manufactured the solar panels for the ADB rooftop project.

To help building owners in the Philippines in greening their operations, the ADB is making available $100 million in loans, which could be used in the installation of solar panels on rooftops.

Based on Chander’s estimates, he expects total installations of solar panels on rooftops between now and next year to reach 115 megawatts, believing that through  ADB’s example, more building owners will see the viability of going green.

With energy demand projected to almost double in the Asia and Pacific region by 2030, there is an urgent need to find renewable sources such as solar to generate power while at the same time reduce harmful greenhouse gas emissions. Almost 700 million people in Asia and the Pacific still have no access to electricity. Lack of access to reliable energy holds back economic development in many parts of the region, the ADB said.

One of the projects being supported by the ADB is solar energy development through its Asia Solar Energy Initiative. Launched in May 2010, the initiative aims to develop and generate 3,000 megawatts of solar power in Asia and the Pacific region within three years.

For its part, the ADB since 2007, has been striving to reduce its electricity consumption by at least 4 percent per year per staff member. The ADB solar rooftop project, in particular, is one among the many efforts being implemented by the bank to achieve energy efficiency.

The ADB has likewise adopted energy-efficient measures such as the use of an efficient heating, ventilation and air-conditioning system and the replacement of normal light bulbs with the more efficient LED lamps.