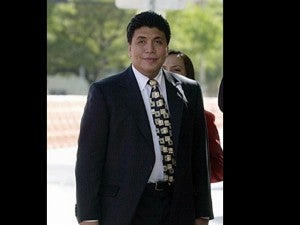 Officers of Philippine Deposit Insurance Corp. (PDIC) served the order on LWUA officers in Quezon City, informing the latter of the takeover of Express Savings Bank Inc. The bank has its main branch in Cabuyao and three other branches in the cities of Biñan, Sta. Rosa and Calamba, all in the province of Laguna.

“I was told that [the bank] was unable to pay its liabilities as they become due … and cannot continue in business without incurring probable losses to its depositors and creditors,” acting LWUA administrator Salvador Ner told the Philippine Daily Inquirer.

Reading a portion of the PDIC memorandum over the phone, Ner said: “According to [Republic Act] No. 7653, the receiver (PDIC) shall determine as soon as possible, but not later than 90 days from takeover, whether the [bank] may be rehabilitated or permitted to resume business.”

Pichay, who was appointed LWUA chair by then President Gloria Macapagal-Arroyo, ordered the purchase of shares and investment in the bank of P780 million of the water agency’s funds in 2009.

On the basis of that unauthorized investment in the rural bank, the Office of the Ombudsman ordered on July 4 Pichay’s dismissal and perpetual disqualification from public office.

The administrative charges that led to the dismissal of Pichay and the two others were based on a complaint filed by LWUA employees.

PDIC is now preparing for the deposit and insurance payout of all valid accounts in the bank, according to an insider who asked not to be named for lack of authority to speak publicly on the matter.

Among the funds expected to be paid out is the P780 million from the LWUA (P80 million for the purchase of 60 percent of the bank’s common shares, P400 million as investment, P300 million as deposit).

“What we are going to do is write [PDIC] a letter expressing our desire to get [the LWUA fund] back. If we cannot get our money, a lot of our projects [will be affected],” Ner said.

Ephyro Luis Amatong, acting chair of the LWUA board, said he and the other board members had “repeatedly” asked Express Savings Bank for the recall of the P780 million since the new set of LWUA directors assumed office on June 6.

Amatong said this was in accordance with the directive of the Monetary Board, which had found that the bank was not a government depository bank.

The directive of the Monetary Board was issued in April 2010 but it was not acted upon.

“A bank is placed under receivership if it is unable to pay its liabilities … and if it cannot continue being in business without involving probable losses for its depositors and creditors,” said Nestor Espenilla Jr., Bangko Sentral ng Pilipinas deputy governor.

In a statement issued yesterday, PDIC said it had taken over Express Savings Bank’s remaining assets and liabilities.

Citing available records, it said the bank had 2,673 deposit accounts amounting to P608.36 million as of end-March.

Accounts worth P500,000 and below are by law covered by insurance provided by PDIC.

Depositors of Express Savings Bank with small accounts each worth P10,000 or below need not file claims unless they have incomplete records with the bank, PDIC said. Their money will be returned to them through postal money orders.

Those with accounts each worth more than P10,000 are required to file deposit insurance claims with PDIC.

A depositors’ forum for clients of Express Savings Bank is scheduled on July 12 to orient them on how to file insurance claims, PDIC said.

The health department was assigned jurisdiction over the LWUA during the Arroyo administration. It was previously under the Department of Public Works and Highways.

The LWUA is in charge of potable water projects across the country and provides credit and financial assistance to water districts.

Arroyo appointed Pichay to the LWUA in 2008, a year after his failed bid for a Senate seat under her administration’s Team Unity.

Pichay was a three-term representative of Surigao del Sur province and one of Arroyo’s most dependable allies in Congress. With reports from Michelle V. Remo and Norman Bordadora in Manila