Philippines GIR up 10% year on year in May 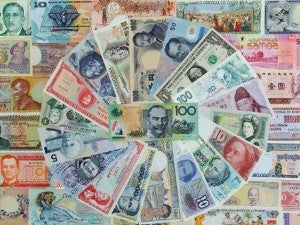 The Philippines’ gross international reserves hit $76.02 by end of May 2012, up by 10 percent year on year, the central bank said. AFP PHOTO

MANILA, Philippines—The country’s foreign exchange reserves climbed in May from a year ago, buoyed by sustained rise in remittances and recovery in export revenues even in the wake of a prolonged debt crisis in the eurozone.

The gross international reserves (GIR)—the country’s foreign-exchange wealth that determines its ability to buy imported goods, pay debts to foreign creditors, and engage in other financial transactions with the rest of the world—hit $76.02 billion by the end of May, up by about 10 percent from $68.85 billion in the same period last year.

According to the central bank, remittances continued to be a key driver of foreign exchange inflows into the Philippines. This is because of the diversified labor markets for Filipino workers that make total remittances almost immune from the crisis in the eurozone.

The latest GIR, nonetheless, fell on a month-on-month basis. It was down by 0.7 percent from $76.54 billion by the end of April due largely to withdrawals by the national government.

The BSP said the government paid foreign currency-denominated debts that were about to fall due, thereby causing the drop in the reserves.

“The slight decline in the GIR level (from that in April) resulted mainly from disbursements arising from payments by the national government for its maturing foreign exchange obligations as well as revaluation losses on the BSP’s gold holdings,” the central bank said in a statement.

A small portion of the country’s GIR is composed of gold holdings. A decline in the price of gold, therefore, pulls down the GIR. Of the latest amount foreign exchange reserves, gold accounted for $9.7 billion.

The drop in gold prices was blamed on uncertainties in the global economy resulting from the debt woes in the eurozone. Analysts said that in times of uncertainty, investors would sell gold, thereby causing its prices to drop, and hold on to the US dollar for safety.

The latest GIR, according to the central bank, was enough to cover for 11.4 months worth of imports. It was also 6.6 times the country’s foreign currency-denominated debt maturing within one year.

These facts, monetary officials said, indicated that the GIR has remained at a very comfortable level since foreign exchange reserves worth at least four months of imports are considered already comfortable.

They said the fact that the GIR has been way more than the country’s short-term foreign debts indicated a favorable level of credit-worthiness.