NEW YORK – Burger King is expanding its empire overseas, this time in Russia. 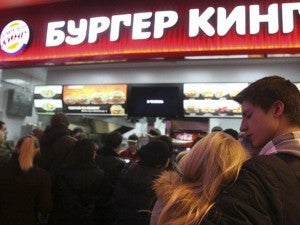 A young Russian couple hugs while waiting in line on the opening day at Russia's first Burger King fast food restaurant in Moscow on January 21, 2010. Chief rival McDonald's has been operating in Russia for 20 years. AFP / ANDREY SMIRNOV

The world’s second largest hamburger chain said Tuesday it has reached a deal with its franchise operator in the country to open several hundred new locations in the next few years. There are currently 57 Burger King locations in Russia.

The deal continues the Miami-based chain’s focus on expanding in emerging markets at a time when the fast food industry is becoming increasingly saturated in the United States. In the past year, 80 percent of Burger King’s new openings have been in the region encompassing Europe, the Middle East and Africa.

Burger King Worldwide Holdings Inc. did not disclose the terms of its deal with Burger Rus, its Russian franchisee, and VTB Capital, a Russian investment bank. The company last year announced a similar expansion deal with a franchisee in Brazil.

Burger King, which has seen its market share in the U.S. decline in recent years, has been undergoing an overhaul since it was purchased and taken private by New York investment firm 3G Capital in late 2010.

The firm has been cutting overhead expenses, renovating stores and working to improve relations with franchise operators to turn around its business. In April, Burger King launched a celebrity-studded TV ad campaign to tout its biggest ever menu expansion, which included fruit smoothies, snack wraps and salads.

Soon after that launch, the company announced plans to go public again on the New York Stock Exchange this month.

Burger King, which has more than 12,500 restaurants worldwide, isn’t the only U.S. fast food company looking for growth overseas.

McDonald’s Corp. is also looking for revenue growth in emerging markets such as China, where fast-growing populations present enormous growth potential. The Oak Brook, Illinois-based chain plans to open 900 new restaurants this year, concentrated in Asia, the Middle East and Africa. That region grew revenue 13 percent over the year, faster than any other.

Yum Brands Inc., owner of the Pizza Hut, Taco Bell and KFC chains, has also been expanding abroad; in its first quarter, the company added a record 168 new restaurants in China.