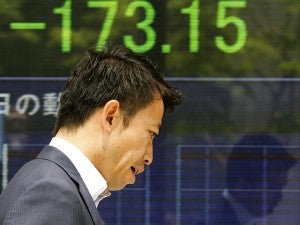 A man walks in front of the electronic board of a securities firm in Tokyo, Monday, June 4, 2012. Asia stock markets took a beating Monday as signs that the U.S. economic recovery might be shifting into reverse sent investors fleeing. Japan's Nikkei 224 index dropped 2 percent to 8,269.14. AP/KOJI SASAHARA

BANGKOK – Asia stock markets took a beating Monday as signs that the U.S. economic recovery might be shifting into reverse sent investors fleeing.

A report on U.S. hiring and employment in May pushed stock indexes to their biggest declines of the year on Friday. The Dow Jones industrial average fell 275 points, its biggest one-day decline since November.

The dismal report came on the heels of earlier data that showed weak economic conditions in Europe and Asia, too. Unemployment in the 17 countries that use the euro currency stayed at a record-high 11 percent in April.

There were signs that growth in China, which helped sustain the global economy through the recession, is slowing significantly. China’s manufacturing sector weakened in May, according to surveys released Friday.

“US jobs numbers were not the only weak reading as manufacturing output data in China and the US were also lower, and euro area unemployment reached a record level,” said Stan Shamu of IG Markets in Melbourne, adding “there aren’t many positives for risk assets at the moment.”

American employers added just 69,000 jobs in May, the fewest in a year, and the unemployment rate increased to 8.2 percent from 8.1 percent. Economists had forecast a gain of 158,000 jobs.

The report, considered the most important economic indicator each month, also said that hiring in March and April was considerably weaker than originally thought.

The Nasdaq composite index has dropped more than 10 percent since its 2012 peak — what traders call a market correction. The S&P 500 is just a point above correction territory.

Benchmark oil for July delivery was down $1.09 to $82.14 per barrel, the lowest since October, in electronic trading on the New York Mercantile Exchange. The contract fell $3.30 to settle at $83.23 in New York on Friday.