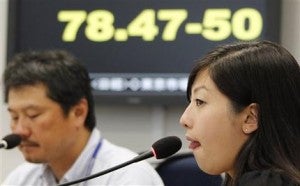 A Tokyo money brokerage employees sit in front of an electronic update board, flashing the current Japanese yen rate against a US dollar in Tokyo, Friday, June 1 2012. The dollar fell to 78.33 Japanese yen from 79.07 yen in New York Thursday, May 31, 2012. (AP Photo/Koji Sasahara)

BANGKOK — World stock markets fell Friday as weakness in Chinese manufacturing suggested the slowdown in the world’s No. 2 economy may worsen, unsettling investors ahead of crucial US employment figures.

The state-affiliated China Federation of Logistics and Purchasing said its purchasing managers index fell 2.9 percentage points to 50.4 percent in May, just above the 50 level that signifies expansion in manufacturing. The index was at 53.3 in April. A second survey by HSBC that is more focused on exporters showed manufacturing continuing to contract.

The Chinese data comes ahead of the monthly US employment report which gives a strong albeit lagging indication of the strength of the recovery in the world’s No. 1 economy. With Europe struggling and China slowing, investors are hoping the US might provide some positive news that could break the recent slide in global stock markets.

“The (Chinese) data is so bad, and so clearly points to slowdown of growth momentum, that it will likely help convince policy makers that the economy needs more stimulus,” Dariusz Kowalczyk, senior economist at Credit Agricole CIB in Hong Kong, said in an email.

“We still do not expect announcement of a big number ‘package’ like during the Lehman crisis, but rather a series of measures to stimulate infrastructure spending and lending.”

Meanwhile, there is still no agreement over how to solve Europe’s debt crisis. Stronger countries like Germany want governments to cut spending, but voters in weaker countries like Greece have shown they are in no mood for more fiscal pain.

The head of the European Central Bank told European Union leaders Thursday that the 17-country euro currency union is unsustainable in its current form.

The euro has fallen nearly 7 percent in May as Europe’s debt crisis intensified. The likelihood of Greece leaving the euro grew in early May when parties opposed to the terms of the country’s financial rescue won at the polls. New elections are planned for next month.

This week, Spain became the new focus of the crisis after its borrowing rates soared to nearly 7 percent, a level that is considered unsustainable for a country to continue funding itself by selling bonds to investors. Greece, Portugal and Ireland were forced to ask for financial aid after their rates went over 7 percent.

In the US on Thursday, the government said the number of people applying for unemployment benefits rose to a five-week high. Additionally, private businesses added 133,000 jobs last month, a figure disappointed most economists.

When the government issues its critical report Friday on May employment, economists expect it to say that employers added 158,000 jobs. That would be better than in the past two months but far below the winter’s pace of 252,000 jobs per month. They also expect no change in the unemployment rate, which was 8.1 percent in April.

“Unemployment and nonfarm payroll will be key,” said Jackson Wong, vice president of Tanrich Securities in Hong Kong. “We are already prepared for a weak number because of yesterday’s reports. So I think now everything is down to the news from Europe.”

Benchmark oil for July delivery was down 57 cents to $85.97 per barrel in electronic trading on the New York Mercantile Exchange. The contract fell $1.29 to settle at $86.53 in New York on Thursday.