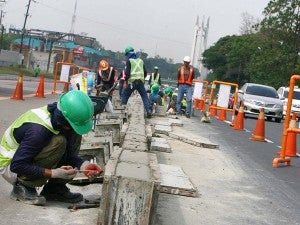 Boosted by increased government spending, the Philippine economy as measured by the gross domestic product (GDP) expanded 6.4 percent in the first quarter of the year, a growth rate that Malacañang says is the highest in Southeast Asia and the second highest in Asia.

GDP, the value of goods produced and services rendered in a given period, rose 4.9 percent in the same period last year and 3.9 percent for the whole of 2011.

The growth in the first three months translated to 1.101 million in additional jobs, mainly in services and industry, said the National Economic and Development Authority (Neda).

At a briefing, Romulo A. Virola, secretary general of the National Statistical Coordination Board, said services contributed the most to GDP growth, with 4.7 percentage points (the highest since the third quarter of 2004), followed by industry with 1.6 points and agriculture, fisheries, and forestry with 0.1 point.

“Also, the Philippines posted the highest growth among Asean and other neighboring countries except China,” said Balisacan, who is also the Neda director general.

Balisacan said growth in the January-March period may be sustained in the second quarter and may even accelerate for the rest of the year.

For the whole of 2012, the “fighting target” for GDP growth is still 5 percent to 6 percent although there is a possibility that actual growth may exceed this level, Balisacan said.

Higher growth would help the Philippines meet its target growth of 7 to 8 percent from 2010 to 2016.

Undersecretary Abigail Valte, a spokesperson of President Benigno Aquino III, said the first-quarter GDP growth validated the optimistic outlook of the President and his economic team.

“We are confident that the positive trajectory of our GDP growth will be sustained in the latter quarters of this year, which have traditionally demonstrated more robust and dynamic economic performance,” Valte said.

HSBC said the country’s surprising growth in the first quarter may slow down in the remainder of the year, saying the crisis in the euro zone may cause the increase in export earnings and remittances to decelerate.

Nonetheless, the international financial services firm said the country’s GDP was still likely to register a faster growth this year at 4.4 percent from last year’s 3.9 percent.

“Growth, while continuing to be robust, will likely slow in the next quarters,” HSBC said in a report.

“Exports, although expected to record positive growth, will normalize and expand at a more modest pace due to the worsening euro zone crisis, the slowing down of China, as well as the gradual decrease of consumer confidence in the United States,” it added.

In the first quarter, according to the National Statistics Office, exports grew by 4.6 percent to $12.86 billion from a year ago. The Euro zone, the United States, and China are the country’s major export markets.

HSBC said remittances growth may decelerate also because of the crisis in Europe that could dampen demand for migrant workers and lead to layoffs.

Another factor that could trigger a slowdown in economic growth in the rest of the year is a potential deceleration in government spending.

Data from the Bureau of the Treasury showed that government spending grew by 9 percent to P122 billion in April from a year ago. This was slower than the nearly 20-percent rise recorded in the first quarter.

HSBC said a 4.4-percent growth for the full year was a realistic projection. Although unfavorable developments offshore may dampen growth in the remainder of this year, the economic climate for 2012 is still believed to be better than that in 2011, it said.

“Even with a slowing of growth in the coming quarters, growth would still accelerate to 4.4 percent from 3.9 percent in 2011,” HSBC said.

Benjamin E. Diokno of the UP School of Economics said via e-mail that the better-than-expected economic growth may not necessarily be sustainable.

“Is the better-than-expected economic growth the result of playing around with price deflators? For example, agriculture shrank by 3.1 percent in nominal terms; yet it increased by 1 percent in real terms. That’s silly unless food prices fell during the period, which they didn’t.”

Diokno also pointed out that export growth exceeding imports growth, as shown in government figures, was “unusual” because of the small growth in exports.

He said this may indicate that imports, especially electronic products that make up the bulk of shipments, must really be low given the recent rise in petroleum imports.

“Certainly, the positive net exports is not sustainable and perhaps not even consistent with strong growth in the future. The global market is shrinking and volatile. The growth of the Philippine economy should be based on domestic demand,” Diokno said.

He also noted that there was a “worrisome” trend in construction, which he said grew on base effect.

“This suggests that the government has to step up its public-private partnership projects (PPPs) and the implementation of its infrastructure program,” Diokno said.

Private construction accounts for about three-fourths of total construction. With a report from Norman Bordadora