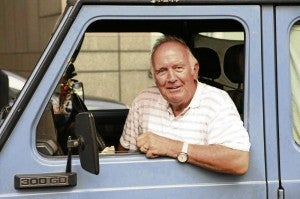 Gunther Holtorf: Met innumerable people and cultures on his life-spanning journey, from kings, royal families, presidents, down to laborers and peasants.

If you’ve seen the animation movie “Up” and were moved to tears, chances are you’ll feel the same for a certain globetrotting 74-year-old German named Gunther Holtorf. For Gunther, though, it wasn’t a house airborne with thousands of balloons. The trip that Gunther took was more “down to earth,” and lasted much, much longer (in fact, the trip is ongoing). And while the movie shows the old man going at it alone with a stranger of a boy (his wife dying before he could make the trip), Gunther was able to go on the first two decades of his epic travel with his wife, Christine (who would have turned 56 last May 25).

On April 5, Gunther arrived at the Philippines, eight days before his durable ride, a 1988 Mercedes-Benz 300 GD diesel-powered SUV he fondly named Otto, rolled out of the Manila ports. His last stop was Singapore. The Philippine leg of his travel would be remarkable for it would be here that he would mark the 800,000th km of being on the road, 23 years after he started it in his hometown near Munich, Germany.

Gunther—who has met innumerable people and cultures on his life-spanning journey, from kings, royal families, presidents, down to laborers and peasants—has been driving alone since Christine succumbed to cancer in 2010.

From April 21 to May 21, Gunther drove 8,000 kilometers along the entire length of the Philippine archipelago, hopping across the main island chains of Luzon, Visayas and Mindanao. The Philippines was his 199th country to visit, and he passed Kilometer 800,000 on May 27.

On May 28, Gunther loaded Otto onto a container for a ro-ro ride to the next destination: Korea. Then onwards to Japan. Gunther himself was scheduled to leave Manila Tuesday night. 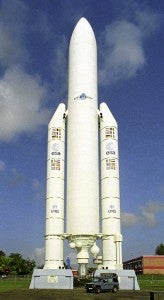 So far, in his 199-country stop, Gunther has logged entry and exit visa stamps from hundreds of border crossings. Gunther explained that most European countries didn’t require entry/exit stamps, but he said that Otto had been in Saudi Arabia six times, Singapore six times, Kenya seven times, Uruguay eight times and Argentina five times. The total border crossings outside of Europe and documented in the customs’ “carnet de Passages” numbers over 300. It hasn’t been cheap. Gunther estimated that on the average, the shipping cost (for Otto) and his travel expenses each time was 3,000 euros. This would include port charges, agent charges, hotel accommodations, plane tickets. “It’s a hell of a lot of money traveling one continent to another,” Gunther sighed.

Gunther recounts that before Christine died, she told Gunther she would be looking down from above to see him fulfill his promise to her: that he and Otto would finish the world tour, and that Otto would be “retired” at the Mercedes-Benz Museum in Stuttgart someday.

Gunther said during a chance interview with Inquirer Motoring May 19 at CATS Motors Inc. along EDSA: “We still continued the trip (even while she fought off her cancer for two years), and in between she was in Germany for two or three months for treatment, and we continued again, but finally it was not possible anymore. But she wanted to see the car in the museum.”

He added that the loss was not easy for him.

“We traveled together for 20 years. She asked me to continue and complete the tour on her behalf. And that’s what I’m doing now. My son Martin was with me last year, but only temporarily.” 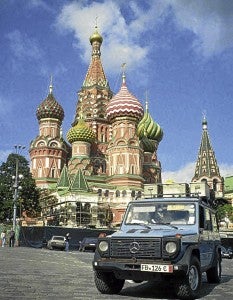 Before embarking on this journey, Gunther had always considered himself an aviation guy. He had piloted a plane, and had represented several airline companies as manager and CEO. “Always looking down, I said to myself one day, ‘I will be down there,’” he quipped.

And so it was in 1989 when Gunther and Christine started touring with Otto. Gunther chose the common German name Otto for his trusted Mercedes-Benz SUV. He bought it brand new, at the last year Mercedes Benz built purely mechanical cars. After that, the era of electronics in automobiles started. “Otto is purely mechanical. I can repair him anytime, anywhere. That’s a big advantage,” he said.

“For this type of tour, Otto is the best one (for the job). As it gets older, then it’s the time you’d see the difference compared to other 4x4s,” Gunther said.

Otto has proven its roadworthiness time and time again. On the African continent, Gunther and his wife enjoyed the virgin wilderness and plains, which Gunther described as having “unspoiled animal nature.” The African leg included several dangerous crossings on weak bridges.

Otto and its precious cargo had also traversed the entire Americas, from South to Central, then to North America, up to the tip of Northern Alaska, and back again to South America. Gunther has driven Otto even to war-torn countries like Afghanistan and Iraq. Man and machine have been to Pakistan, Iran, Saudi Arabia and Turkey, and across the entire European Union, Scandinavia, and even on desolate Siberia and on the unforgiving Sahara desert. Gunther’s travel story is certainly for the books. He described the trip to South America as similar to the one in Africa: “It’s all animals. No people. About two weeks without any human being, only with the big animals.”

Christine was with him during the drive on the African continent. And so were their trips to the Sahara desert and Montserrat (the former capital, Plymouth, was described as being covered by volcanic ash), and while crossing war-torn Afghanistan and Iraq. Christine was also with him when he dislocated his right arm in the North Sudan desert. He described her as his “greatest help and support, and a very brave travel partner.”

The trio also crossed the Amazon, while Otto suffered a front wheel bearing problem in the high Andes. And what a place Otto would choose to break down—at 4,700 meters above sea level, in an area that had last seen a human visitor several months ago. 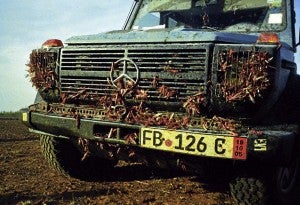 Even after Christine passed on, Gunther’s adventures continued, as promised. Once, when he was sleeping in a hammock close to the Sambesi river bank in Zimbabwe, he was awoken by a spotted hyena. The two creatures stood face to face, merely 50 cm apart.

Among his unforgettable tours was the pioneer crossing of the jungle between north Brazil and Georgetown/Guyana “where we got stuck during Christmas eve.”

Driving across North Korea was, for him, a most unbelievable experience. It was December of last year when Otto became the first-ever foreign car that set, all four wheels, on North Korea.

“There’s no foreign-made car in North Korea. Never ever,” he said. “We were there as government guests. For tourists, it would have been impossible to bring in the car. My government in Germany, the German foreign minister, couldn’t believe that the car made it to North Korea.”

It was after his tour to China that he successfully entered North Korea. It was, as he said, a “very, very special case. Not even the US President gets invited there,” he chuckled.

If Otto was an animal, it would have decided to quit long ago. Good thing the mechanical beast was able to literally stomach everything Gunther could throw at it.

For starters, Otto had been averaging a fuel consumption of 9 km per liter for the entire trip thus far.

“Otto is much, much heavier than an ordinary car. This car has many spare parts, many tools. (With) all the equipment…all clothing and what have you… [t]he car is 400 to 500 kilos overweight. There are two spare tires on the roof, spare parts, winter clothing, even the kitchen. It has been home for many years. I have a water container that acts as a sink. I can shower and wash my hands,” explained Gunther.

Andros Villaraza, brand manager of Mercedes-Benz marketing communication, said, “Three years ago, Gunther wanted so much to come here but he was coming from Malaysia and he wanted to go to Mindanao. That time there was trouble in the South because of the Abu Sayyaf, so we kept giving so many excuses.”

Andros said Gunther didn’t want a hotel, nor a mobile phone or even GPS. A compromise had to be arrived at for the peace of mind of his hosts. “We were able to convince him to carry a mobile phone, just for emergencies.”

“Normally I wouldn’t have it. No electronics on board,” Gunther added.

Gunther said he has learned a few tricks for his safety, but Inquirer Motoring would rather not divulge them.

“The greatest concern is security. Since that car is special, I make sure to avoid unnecessary attention.”

On Gunther’s first day here, he said he rode the MRT from end to end. He used printed maps as guides, because, he said, it was easier to read. “You have quite good maps published here in the country.”

“When you travel, the expensive part is the hotel accommodation and the food. So I have my private accommodation (my car), and as for the food, me and my wife prepared our own meals. We bought ingredients in the local markets. So to that extent the cost is relatively low.”

He added that “the expensive part now is the fuel because all over the world, fuel has gone up. And the number two most expensive has been the shipping cost.”

After all this time spent with Otto, would Gunther find it hard to part ways with the machine when it eventually gets turned over to the Mercedes-Benz museum?

“I can (always) go to the Museum and see it. The car will continue to exist and to live. If someone (buys) it, they will put in their private collection, and it would seem like it doesn’t exist anymore. In the museum, you can see it, touch it. For me, Otto has been like my child.”

For Gunther, Otto has been a once-in-a-lifetime car, and rightly so. “This car should have a special display area of its own. This car comes with a story, from virtually every country in the world.” And, if we may add, the car comes with a love story transcending borders and lifetimes.