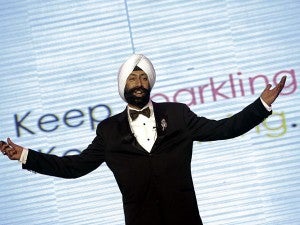 Entrepreneur Mercy Evangelista from Davao became a millionaire from selling intimate apparel and lipstick. With her good fortune, she opened a hospital and set up a resort.

“She does good for society. When you meet her, you wouldn’t know that she’s got that much wealth. She’s so humble that she wants to give back as much as she can to her people,” says Kanwar Bhutani, Avon Philippines’ new president and general manager.

Evangelista is one of the so-called “Avon Ladies,” independent representatives who can earn much through diligence and building a huge sales force.

To increase the ranks of successful “Avon Ladies” like Evangelista, Avon launched a program to motivate top earners to duplicate themselves.

Last week, some 1,300 women from the provinces packed the Philippine International Convention Center for a big confab, hosted by Avon.

Teetering on high heels, they were clad in jewel-toned gowns and crowned with tiaras at the President’s Banquet and Gala Night.

The objective was to pump up the crowd with the entertainment numbers, let them be inspired by meeting such Avon endorsers as Anne Curtis and Lucy Gomez and listening to testimonials about how direct selling can change lives.

Direct selling has been sweeping the Philippines, invigorating a giant brand and providing earning opportunities, often for low-income or unemployed women.

This year, Avon stepped up its Avon Sales Leadership level with Project YOU, which makes its international debut in the Philippines.

Christa Hart, Avon’s vice president for the global business model, explained that the Philippines is one of the strongest market from the leadership perspective. 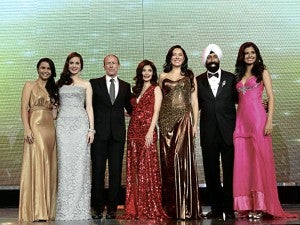 Project YOU (Your Opportunity Unlimited) inspires representatives to widen their network and earn bigger commissions from developing leaders like themselves.

With its huge population, the Philippines provides limitless prospects for direct-selling companies. They recruit women and drive them to be assertive in sales, particularly to relatives and friends.

They utilize the multilevel marketing programs that reward workers for taking on other representatives.

Avon’s message of empowerment resonates with many women, especially in the provinces where earning opportunities are limited.

“When you look at the housewife who joins Avon, her eyes glow when she hears our brand. She comes in as the shy individual who doesn’t have the selling skills. As she becomes a franchise dealer, the company transforms her. As she progresses and falls in love with our brand and our products, she earns commissions from the products that she buys which is initially for her personal use and subsequently she starts selling to others. As she goes up the career ladder, she starts bringing in other people underneath her. Then she gets promoted to a higher level,” explains Bhutani.

These women start out as franchise dealers then move up to the sales leadership strata.

“As she gets to a higher level, then we want her to replicate herself so that people underneath her can get to a higher level as well. Project YOU provides very competitive earning opportunities in the industry. When you replicate yourself, we just don’t say ‘Thank You,’ but you get a bonus to go along with it. In human psyche, titles and recognition are important. We give them a pat on the back, no matter how big or small their contributions are,” says Bhutani.

Avon is dangling such incentives as a Honda, Mitsubishi and Mercedes Benz. Depending on their earnings, the cars are leased to them for a year.

“In the provinces, you’ll see this tricycle with a Mercedes parked next to it because she worked hard to earn it,” says Bhutani.

Through initiatives such as the leadership program, Avon’s business has been thriving this year. Recruitment strategies have led to the creation of small communities that spread Avon’s word.

“We make sure we have the right product portfolio,” says Bhutani. “Further, we’re motivating our sales force. We find out what their dreams are and help them reach their dreams, whether it’s to send their kids overseas for education, buy a house or a car.”

With Project YOU, once these leaders have realized their personal dreams, they can help others fulfill their own dreams.

Intimate apparel is the most salable, forming a third of its business in the Philippines.

Bhutani hopes that every drawer in the Philippines should have an Avon intimate. Plans are afoot to expand into untapped markets.

“I want us to view Avon as the one-stop in future. In the provinces where you don’t have a large store or accessibility, you can have Avon not only for beauty needs, CFT (cosmetics, fragrance and toiletry) needs but also for your other needs from nutritionals to home products because of the brand quality,” he says.