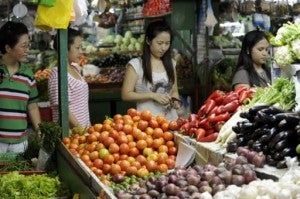 Customers buy vegetables in Farmer’s Market in Quezon City in this 2011 file photo. According to the Bangko Sentral ng Pilipinas, the hike in the minimum wage in Metro Manila is not expected to have a major effect on consumer prices in the country in 2012 and 2013. AFP PHOTO/JAY DIRECTO

MANILA, Philippines—The hike in the minimum wage in Metro Manila is not expected to have a major effect on consumer prices in the country, according to the Bangko Sentral ng Pilipinas.

BSP Governor Amando Tetangco Jr. said the increase in the daily wage by P30 had been taken into consideration when the BSP made its inflation forecasts.

The government expects inflation, or the rate of increase in consumer prices, to range between 3 and 5 percent for 2012 and 2013.

Based on latest estimates by the BSP, inflation may average at 3.1 percent this year and 3.3 percent next year.

“This [latest wage hike] is broadly in line with the wage assumptions that have been incorporated in our central forecast. We continue to expect average inflation to be within target this year,” Tetangco told reporters.

According to the National Statistics Office, inflation averaged at 3 percent in the first four months of the year.

BSP, which is one of the agencies consulted by the regional wage boards in determining the appropriate increase in wages, said that the rise in workers’ pay will not pose a significant inflationary threat as long as it goes with the rise in labor productivity.