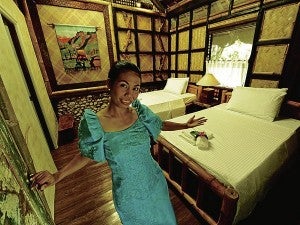 BANI, Pangasinan—Tucked in the seaside village of Dacap Norte here, a compound where a family spends their vacation each summer is slowly being turned into a nature resort that harnesses the ecotourism potentials of this town.

The seven-hectare Old Woods by the Sea, which faces the West Philippine Sea, is still a work in progress, says Elizabeth Navarro, a retired doctor who, with husband Mayor Marcelo Navarro, owns and operates the resort.

But already, friends and guests are coming to enjoy what the countryside offers, she says. 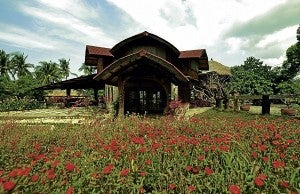 “This was not intended to be a resort,” Marcelo says. “We built the original house in 1995 to be a retirement house for Daddy (his father and namesake, the late Mayor Marcelo Navarro Sr.), and as a summer place for family members.”

“[My father] loved to plant trees and he planted most of the trees here. But we lost him in 1997. The place was left untouched until 2001 when we repaired the house. I planned it to be my retirement home.”

The resort’s name, its owners say, may refer to the old trees around the compound and to the cottages built from wood salvaged from old buildings, churches and river beds. 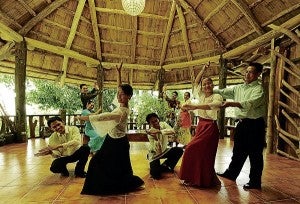 Seven cottages were built without damaging the natural elements in the area. For instance, if one finds a rock inside a room, it is because it was there before the cottage’s construction. If tree branches shade a porch, it is because these have not been trimmed.

The cottages have curious names. “Balay Bato” (stone house) came about because the deeper the workers dug when they were preparing its foundation, the more rocks and stones they excavated.

Balay Bato was supposed to be the “dirty kitchen” where firewood used for cooking would be stored. But the resort staff did not want to damage the structure so it was turned into a cottage instead.

A BEDROOM at Old Woods by the Sea. PHOTO BY EV ESPIRITU/INQUIRER NORTHERN LUZON

Another cottage started out as a potting shed for Elizabeth, who loves gardening. When British birdwatchers advised local officials that they would visit the town, the shed was rebuilt to accommodate them.

The “Timpuyog” was where the mayor held meetings with his political supporters. It has been turned into a guest house with two bedrooms and a function area.

Some cottages were named after the trees near them—“Santol,” “Anahaw,” “Old Woods,” “Dayap,” and “Mangga.”

“Mangga cottage used to be called ‘Sineguelas’ (Spanish plum) as it was nearer that tree, but the wood carvers thought it was very long so we changed it to mangga instead,” Elizabeth says.

She says none of the cottages has air-conditioning because they want their guests to experience the natural environment. The resort is supplied by spring water.

Bani caters to the adventurous. There is a bike route to the pilgrimage area of Surip, or tourists can go kayaking, scuba diving or swimming. The beach is accessible through a trail that descends from the resort.

Olanen cove and Tubong beach in Barangay Dacap Sur are alternative places for tourists to visit.

Guests can also explore the Nalsoc cave in Barangay Colayo. The cave system of Nalsoc (which means ‘big hole’ in Ilocano) boasts of stalactites and stalagmites.

Other nature treats for visitors in Bani are the Balingcawa falls in Ranao village and the Bangrin mangrove forest in San Miguel village.

The Bangrin mangrove forest is included in the 2008 book, “Bird Watching in the Philippines,” as one of the 13 best birdwatching sites in the country.

And to cap a tiring day around town, the Old Woods by the Sea offers hot meals and coffee at the Café Elizabeth, a cottage amid a sea of green.