More ‘hot money’ seen to make its way to PH

Analysts say investors have begun to take notice of Manila
By: Ronnel W. Domingo - @inquirerdotnet
Philippine Daily Inquirer / 03:04 AM May 14, 2012 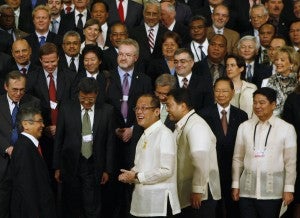 President Aquino, foreground third right, smiles as he poses for a group photo session with foreign delegates during the opening ceremony of the four-day Asian Development Bank 45th Annual Board of Governors meeting in Pasay City on May 4, 2012. According to First Metro Investment Corp. and the University of Asia and the Pacific, the ADB meeting may trigger the inflow of more foreign portfolio investments into the country. AP PHOTO/CHERYL RAVELO

The recent meeting of the Asian Development Bank’s Board of Governors held at the Philippine International Convention Center may trigger the flow of more “hot money” into the country, according to First Metro Investment Corp. and the University of Asia and the Pacific.

In the latest issue of “Market Call,” analysts from the two institutions wrote that global investors would likely take note of the gains made by the Philippines in the past decade as well as the improving outlook in the coming years.

“This will add to an already high liquidity provided by the ever-increasing remittances (from overseas Filipinos),” they said.

Still, the transactions in March reflected a decrease in net inflows from the $245 million reported in the same month of 2011.

Also, transactions in the first quarter of this year resulted in a net inflow of $439 million—lower than the $972 million recorded in the same period last year.

The BSP data showed that in March peso-denominated government debt notes yielded a net inflow of $189 million, while shares listed on the Philippine Stock Exchange chalked up $110 million.

The FMIC and UA&P study also showed that the peso could weaken steadily in the next three months and settle at 43.10 against the dollar in July as the greenback recovers amid an improving US economy.