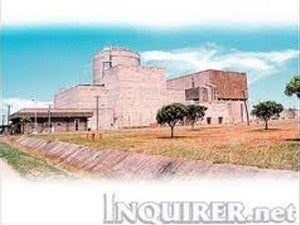 MANILA, Philippines- The government is not content with the $50 million that businessman Herminio Disini has been ordered to repay the government for his role in defrauding the country of billions of pesos through the corrupt-ridden Bataan Nuclear Power Plant (BNPP) deal.

It also wants the late dictator Ferdinand Marcos, who it said had acted in conspiracy with Disini, to similarly be made to make restitution for the anomalous contracts and concessions he gave to his associates in the scuttled project.

The Office of the Solicitor General (OSG) has filed a motion for partial reconsideration with the Sandiganbayan 1st Division for the antigraft court to also order Marcos to return the ill-gotten commissions that he in conspiracy with Disini had allegedly obtained through the anomalous contract.

The OSG said the government was entitled to actual or compensatory damages as well as to the return of the P22.2 billion that the government spent in total to build the plant.

The motion for reconsideration is directed at the Sandiganbayan decision of April 11, in which the antigraft court partially ruled in favor of the government in a civil case in connection with BNPP deal and ordered Disini to surrender $50.6 million in commissions that he received for helping two foreign firms obtain the contract to build the mothballed BNPP in 1974.

But though it found Marcos to have had a “personal financial interest” in the transaction, the Sandiganbayan said the government failed to present evidence to show that the dictator or his wife, Imelda, received any part of the commissions from the BNPP deal.

The court also found no evidence to support several other allegations of the government, such as that Marcos ordered the massive and unlawful withdrawals of assets from the National Treasury, the Central Bank and other depository institutions; that Marcos and Disini embezzled government funds or used them for their own benefit; and that Disini had acted as a dummy for the Marcoses in controlling several corporations.

The government had charged Disini of using his ties with Marcos to secure the BNPP contract for two US firms, the Burns & Roe engineering company and Westinghouse Electric Co., which allegedly paid Disini $18 million in bribes. The pay-offs allegedly went to companies that were co-owned by Marcos and Disini.

In the motion for partial reconsideration it filed yesterday, the OSG said the conspiracy between Disini and the late dictator to amass ill-gotten wealth was shown through its evidence, and that Marcos would not have entered into the deals with Disini if there was nothing in it for him.

It pointed out that the transactions in this civil case involved multi-millions, if not billions, of pesos.