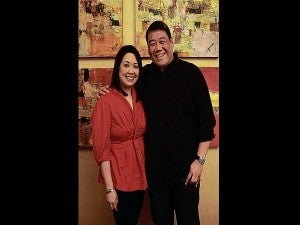 Other local brands have tried to woo Hollywood A-listers but failed.

But when Zac Efron did his homework on Penshoppe and heard that it was a cool brand, he was more than happy to accept his first-ever fashion endorsement.

Efron’s support is a compliment to Filipino entrepreneurship.

Bernido Liu, president and CEO of the fashion company, Golden ABC Inc., would chuckle when he would be reminded of Penshoppe’s backyard business of graphic t-shirts in Cebu in 1986.

After 26 years, Penshoppe has become a purveyor of high-quality fashion at affordable prices, with no less than Efron, Ed Westwick and Mauro Maurer as its image models.

“We adapted to the demands of the market and raised the desirability and value of the brand. From a simple t-shirt, it has become a lifestyle brand,” says Liu.

Penshoppe is the flagship of Golden ABC Inc., which has spawned other brands such as the edgy Oxygen, Memo for office wear and ForMe for women of different body types. To further raise its image, Golden ABC Inc., has acquired Regatta, the aspirational casual wear, and Tyler, the premium brand.

Liu boldly contends that Golden ABC’s brands can stand up to foreign labels, itself become world-class. About 70 percent of the products are made in the Philippines.

“We are raising the flag everywhere we go. In the Middle East, we will end the year with 10 stores in Saudi, Bahrain and Dubai. We franchise the brands. You have to work with the right partners,” says Liu during an exclusive interview at the Edsa Shangri-la Hotel.

In the Philippines, Golden ABC’s brands ended 2011 with 500 stores. It is targeting 600 stores by yearend. The company also ventured into direct selling with its Red Logo label and a Consumer Group division that  sells fragrance and cosmetics under the Acquabella label. The company grew by an estimated 60 percent last year. With the opening of  the new stores, the expansion of its direct Red Logo dealership, distribution of its consumer goods and foray  into the high-end market, Golden ABC is targeting 80 percent growth this year. 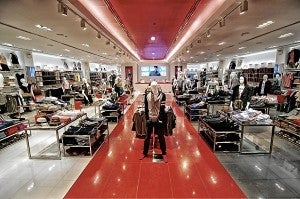 “The success lies in the four P’s of marketing—product, place, promotion and price. With that convergence, we are experiencing unprecedented growth and advancement,” says Liu. “These are exciting times. We’ve been blessed. These are part of our desire to level up. After all, the Filipino has also leveled up in sophistication.”

Regatta was established in the late 1980s by Lizzie Zobel and was later purchased by Mia Dragon-Floirendo. Under Golden ABC, it has striven to improve the product, the selling environment and raise the level of sophistication of its campaign with foreign models photographed abroad. Its tie-up with National Geographic and Discovery Channel gave the public the impression that it was an imported brand. However, they were delightfully surprised by the affordable price tags of first-rate clothing. From four stores, it expanded to 26 branches with ten more opening this year.

“We restored Regatta to its original look and position. It’s the brand that our kids grew up in. The fashion basics are stronger than ever,” adds Alice Liu, vice-president for retail.

When Eman Pineda, founder of high-end label, Tyler, tried to divest it, he trusted Liu for his accomplishments, particularly in raising the profile of Regatta. Alice pointed out that Pineda was impressed with Golden ABC’s sound business management and strategic growth.

“It’s difficult for a retailer to nurture a Filipino brand to its full potential. Although there are many retailers, they are franchises of foreign brands. Eman (Pineda) saw what we did to our brands. I am very proud to say we’re the only Filipino company that carries all home-grown brands in our portfolio. I have resisted tempting offers to acquire franchises of foreign brands, given our network and structure. I’m very focused in developing our proprietary brands,” says Liu.

Many malls, including the new ones, wanted to invite Tyler as one of its tenants. Liu said it’s still in the process of redevelopment and being integrated into Golden ABC.

Meanwhile, Penshoppe has been flexing its muscles. “We are getting ready to fight globally. Other brands have that ‘bango’ factor. We have to make sure that we are on a par with them,” says Alice.

On its choice of endorsers, Liu points out they just don’t get anyone who’s popular. “The celebrity has to be aligned with fashion,” he says.

Although A-list Hollywood endorsers may draw attention to the brand, ultimately, the product and the store experience determine the verdict. Hence, Golden ABC hired a Hong Kong-based company to redesign Penshoppe’s stores, replete with a video wall and a state-of-the-art lighting and sound system. Even the sales associates underwent a makeover.

“Everything is clean and simple in presentation. A good team of visual merchandisers is telling our story. What makes the cash register ring is the merchandise,” said Liu.

Penshoppe has been getting inquiries from Indonesia, Malaysia, Singapore, Hong Kong, the United States, Australia and South Africa.

“I don’t want to overdo. Opening a store is easy, but keeping it open is not. I don’t want to commit and under-deliver. Penshoppe has 250 stores and we have not renovated 10 percent. That’s how much we still have to do,” said Liu.

Without any hype, the direct selling and consumer group businesses are growing exponentially. Now on its fourth year, Red Logo, the direct selling line, grew by 17 percent. It now has 27 branches in the Philippines with over 50,000 active dealers. The top sellers were rewarded with an all-expense paid trip to Beijing.

“It’s heartwarming to see how the business could change people’s lives,” says Alice, on how the company, through Red Logo, provided opportunities for entrepreneurship.