Success in construction a challenge for women | Inquirer Business

Success in construction a challenge for women 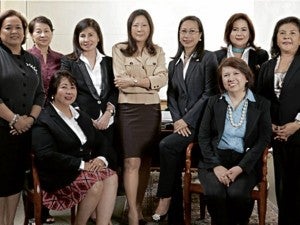 Imagine a construction site where the workers howl and whistle at a lady walking along the street. Annoying as that might seem, it is quite typical, right? But what if the scene was reversed? …and the workers, all women this time hooting at the passerby—a man. Such would be amusing, if not hilarious. While the second scenario isn’t likely to happen in most construction settings, the idea of women in construction is really nothing new.

In 1447, Flemish painter Roman de Girart von Roussilon created an unusual art piece titled “Women Builders.” The painting, which shows two 15th century women carrying heavy blocks at a construction site, clearly documents the participation of women in this activity. Today, centuries later, society has still to fully appreciate the involvement of women in construction work and get past the so-called macho mindset which confines the building business only to men.

While it is still predominantly a man’s world in the Philippine construction industry, a significant number of Filipinas have long pursued careers in construction and even made waves in this field. A few years back, a woman was declared the best welder in a national competition. This is probably because women who are getting into the trades possess the patience, an attention to details, and that proverbial “soft touch” needed in most types of construction tasks. Yet, even to this day, customers still prefer to deal with a male contractor than the female one.

To address the various concerns of women involved in construction, a diverse group of 13 women professionals led by Mallie Golangco, current president of William Golangco Construction Corp. (WGCC)—one of the most prominent and reliable construction companies in the country—organized the Women in Construction Foundation Inc. (WIC) on May 5, 1997. Back then, Mallie was chief of staff or chief operations officer (COO) also jokingly referred to as “child of owner” of her father, the late William Golangco, a multi-awarded civil engineer famous for such edifices as the American Embassy, Robinsons Galleria, SM North Edsa complex and Asia Brewery.

The senior Golangco was a three-time Presidential awardee (by Philippine Presidents Ramon Magsaysay, Ferdinand Marcos and Gloria Arroyo) having been recognized for his excellence in building construction. Like her father, Mallie proves to be one of the country’s highly successful business executives in the construction field.

As the first president of WIC, Mallie Golangco along with her cofounders wanted to build a network among women in specific fields of construction where they can take leadership roles, promote excellence and high ethical standards not only in their workplace but at home and in the community as well.

The objective is to provide an avenue for the improvement of knowledge and skills in the construction industry, specifically where women can excel and also create a network for the mutual exchange of moral and business support. Furthermore, WIC seeks to identify and support special issues and concerns affecting women and the formulation of the appropriate actions to address such issues and conduct training and outreach programs.

WIC targets to attain a varied representation of the different disciplines in the construction industry that would provide a comprehensive view of the trade through its members. From an initial composition of 13 charter members, WIC has now expanded to an impressive count.

“We want a cross-section of all the different areas in construction,” Mallie Golangco said. “We are very proud now to have in our foundation architects, landscapers, interior designers, engineers, suppliers of construction materials and décor items and even lawyers handling construction-related cases and issues.”

The first project of WIC after it was formed was a technical enrichment trip to Hong Kong where the members learned the latest technologies, most modern construction materials and newest trends in the industry. The observation tour paved the way for other activities and projects that included financial support to female students taking up engineering and architecture courses in college; and organizing medical missions for their less fortunate members; holding symposiums on the role of women in construction.

WIC also assists Tesda in training and improving women workers’ technical skills in specialized fields of construction. It participates in Philconstruct, an annual exhibit that gathers around 1,000 corporate exhibitors here and abroad.

Numerous training seminars, forums and conventions were also conducted for students and professionals on a wide variety of topics such as soil and waste management, green and sustainable environment and other socio-cultural-economic awareness programs ranging from contracts management, overcoming blocks to personal and financial success, to Laughter Yoga. The foundation acknowledges its members’ familial ties by providing them with opportunities to explore and enjoy the beauty of the Philippines as well as occasions to travel abroad together with their family and discover new technologies in construction.

An adage that very much applies to construction work goes: “Any change that occurs is not durable unless the change starts from within.” WIC takes the saying to heart with its numerous programs for women. As the foundation turns 15 years old today, it continues to push for the overall growth of its members. The challenge of making it big in a man’s world is huge but WIC’s holistic approach to building and developing every aspect of the woman both as a person and as a professional more than prepares and equips her to knock down the barriers blocking her way in the future.