Banana exports to be hit by Scarborough dispute– industry insider 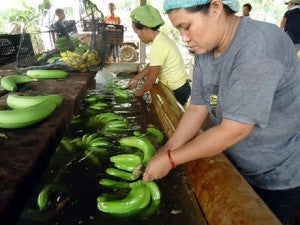 DAVAO CITY, Philippines – The tension between the Philippines and China over the Scarborough shoal may eventually take its toll on the banana industry, a ranking industry official said on Thursday.

This, Antig said, had surprised the banana industry – which has been exporting Cavendish there for over a decade now.

He said China rejected a shipload of bananas sent from the Philippines because it allegedly failed quarantine tests.

Antig would not divulge the name of the company that sent the bananas but added that other companies in Mindanao have been using the most advance and high-end technology to process their products.

“We have been very careful in shipping bananas to China and see to it that there is no problem,” he said.

The rejection, he said, sent jitters to the banana industry in Mindanao – made up of about 18 companies – because it was unusual.

“We recently held meetings and shared the same apprehension that we may lose the valuable market in China as a result of the dispute over the shoal,” Antig said.

Antig said the Department of Trade and Industry (DTI) had asked Chinese authorities if there were plans to stop imports from the Philippines.

The answer was “it’s not yet happening”,” Antig said.

“Anything could happen and we are keeping a close watch,” he added.

While China has the right to impose stricter quarantine control, Antig said the move came in the wake of the shoal dispute.

“It is only now that they become stricter or stringent,” he said.

Of the estimated 75 million boxes that banana companies send overseas each year, “more than half goes to China,” according to Antig.

“Much bigger than Japan,” he said.

Antig said if the Philippines lost the China banana market, it would trigger the economic downfall of the banana industry.

The Scarborough shoal issue might be viewed as a political one but it could have a devastating effect on the trading relations between the country and China, Antig added.