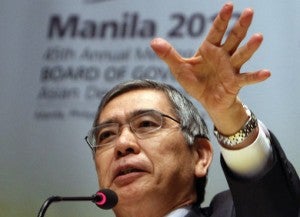 OPTIMISM Haruhiko Kuroda, ADB president, speaks of continued Asian growth during a press conference of the 45th ADB Board of Governors’ meeting on Wednesday. RAFFY LERMA

Administration officials are optimistic that the Philippine economy will expand by 5 to 6 percent in 2012, higher than the 3.7-percent growth posted in 2011.

Socioeconomic Planning Secretary Cayetano W. Paderanga Jr. told reporters on the sidelines of the 45th Asian Development Bank governors’ annual meeting in Manila that the government’s expenditures program was getting on track and economic indicators were looking “good.”

ADB president Haruhiko Kuroda said the Philippines and its neighbors were poised to weather the effects of a mild recession in the Euro zone this year, but stressed the urgent need for member-countries to address the wide income inequality in their jurisdictions.

Kuroda said the crisis in the Euro zone was not expected to cause a significant drag on growth rates of Asian economies and on remittances that countries like the Philippines receive.

“We expect a rosier 5 to 6 percent GDP growth for 2012” not only because of “strong spending” but also because of the government’s “strong resolve on good governance,” Public Works Secretary Rogelio L. Singson said.

GDP or gross domestic product is the value of goods produced and services rendered in the country in a given period. It excludes remittances by overseas Filipino workers and earnings of Philippine firms abroad.

Good performance of the Philippine Stock Exchange which had seen more than 17 record closing highs since January.

A banking system that is “one of the healthiest in Southeast Asia.”

These strengthen business confidence in and provide “strong international support” for the Philippines, especially for its public-private partnership (PPP) program, said Paderanga and Singson.

Cosette V. Canilao, PPP Center executive director, said four projects were recently submitted to the National Economic and Development Authority for review and more projects were in the pipeline.

She said the Australian Agency for International Development had committed additional funding, bigger than the $7 million allotted last year, to support the PPPs through a grant administered by ADB.

ADB country director Neeraj Jain, in a separate briefing, noted “some recovery” in exports after the 7-percent decline last year.

Jain said the Philippine government would do well to consider  diversifying products (which has been semiconductor-heavy) and markets (more around Asia rather than industrialized Western markets).

Optimism in the first quarter came from accelerated public works and signs of exports recovery, Paderanga said. He said the GDP growth of 5.5 percent in the first three months was within range.

The country’s top economist said this level of growth may be sustainable throughout the year if government spending, the main growth driver this year, continued on an accelerated pace as in the first few months.

Slow government spending and sluggish global trade resulted in a 4.6-percent GDP growth in the first quarter of 2011.

The Philippine economy must grow by 7 to 8 percent annually to generate enough employment and income opportunities for a larger number of Filipinos, according to the Philippine Development Plan 2010-2016. It has consistently grown over the years, managing to expand its economy even at the height of the latest global crisis in 2009 when many countries fell into recession.

Economic growth becomes meaningful when it leads to poverty reduction, and when income distribution becomes closer to being perfectly even, according to Kuroda.

“The Asia Pacific region should be able to maintain its growth momentum despite the ongoing troubles elsewhere in the world,” the ADB head said.

“However … the benefits of growth have yet to reach several hundreds of millions of Asians who continue to struggle on less than $1.25 a day,” Kuroda said.

Ironically, key factors for Asia’s economic development—technological advancement, globalization, and market-oriented reforms—were also the cause of the wide disparity of incomes in Asian countries.

This is because such developments make it difficult for the poor, both individuals and micro enterprises, to compete in labor and capital markets, respectively.

“While these economic trends cannot and should not be reversed, it is critical that they be counterbalanced by policies that will make growth in the [Asian] region more inclusive,” he said.

These policies may include higher investments in public education and infrastructure.

Sending more poor children to school will give them better employment opportunities in the future, while heavier investments in infrastructure can attract more enterprises to do business in a country and thus create more employment, he said.

Governor Amando Tetangco Jr. of the Bangko Sentral ng Pilipinas agreed with Kuroda that the Philippines would continue posting a decent economic growth this year even if the Euro zone suffered from a mild recession.

Because the Philippine economy relies more heavily on domestic consumption than exports, it can manage to grow even if exports to the Euro zone become anemic, Tetangco said.

He said the crisis in the Euro zone would have a minimal impact on remittances of OFWs because they can be found in many countries and industries.

“We maintain our projection of a 5-percent growth in remittances to the Philippines this year,” Tetangco said. Last year, remittances reached $20.1 billion.