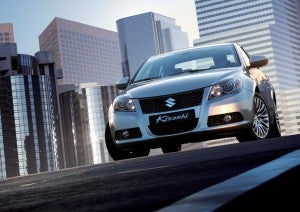 Has it been just coincidence that two Japanese car companies—Suzuki and Toyota—are fruits of the loom?

Kichiro Toyoda traveled to Europe and the United States in 1929, reportedly on a research mission. He was considering expanding his family’s loom-making business and ventured into the automotive industry.

According to Tony Lewin, former What Car? editor and author of the “AZ of 21st Century Cars,” Toyoda’s firm began developing gasoline engines, and produced its first vehicle prototypes in 1935.

Suzuki Motor Corp., according to auto expert Giles Chapman (author of over 15 books, including “Car Badges”), also grew out of a family-owned loom-making business. It diversified into motorbikes, launching its first car, the Suzulight, in 1956.

Since then, it has specialized in small cars and 4×4 vehicles.

The two former loom-makers weaved into each other’s paths in the Philippines last Thursday when they unveiled their iterations of executive class sedans: Suzuki’s new entrant Kizashi (2.4 L VVT) and Toyota’s Camry (with multiple variants 3.5 V6, 2.5V and 2.5G). Right off the bat, we can conjure up a classic Japanese showdown much like that between the iconic sci-fi figures Astro Boy (for Kizashi) and Godzilla (for Camry). Well, actually, the Internet has a handful of Astro Boy and Godzilla duels made by fans from both camps.

Suzuki, the world’s 9th-largest car manufacturer now unleashes the Kizashi as its first serious foray in the mid-sized sedan segment. Serious because its 2.4-liter engine is coupled with a Continuously Variable Transmission (CVT) with 6-speed manual mode; six airbags are included as a standard feature along with an ESP [Electronic Stability Program] that maximizes the driver’s control and stability in various conditions. It has been considered a serious sedan yet designed as a driver’s car instead of a chauffeur-driven car.

Suzuki, the “quietest and most cautious of the Japanese automakers,” as described by Lewin—has for many years achieved success because it has been sticking to what it knows best—small cars and small to medium 4x4s. In the Philippines, Suzuki’s image is no different, as the brand has become popular for its motorcycles and fuel-miser subcompact cars—consistent dean’s listers in the Department of Energy’s fuel economy run, particularly its mini-car Alto, which had a record 34.4 km/liter run.

Obviously the Godzilla of the auto industry, Toyota has become a legend growing upon legends. The world’s No. 1 automaker’s corporate culture “The Toyota Way” has been sampled, studied, experimented on, and duplicated as a business model by global companies. And although it has been selling “unpretentious, plain clothes products to buyers unconcerned about striking a pose,” as what Lewin describes Toyota, the automotive giant’s “cards” for the last decades of the 20th century have been diverse—family cars, subcompacts—sometimes even uninspiring ones. Inspiring or otherwise, the Toyota badge of reliability has always been there to back all of these products up, combined with motorsport credentials and 4×4 heritage.

So, now, it all comes down to Astro Boy’s Kizashi, and Godzilla’s Camry. Does the little upstart hold its own versus the thunderous giant? It’s too early to tell right now. Not when we’ve just met them. But on paper, what we can say for certain is that the Camry 2.5V and 2.5G (4-cylinder In Line 16 valve DOHC, Dual VVTi) variants are the closest competitors of Kizashi’s 2.4VVT gasoline engine. 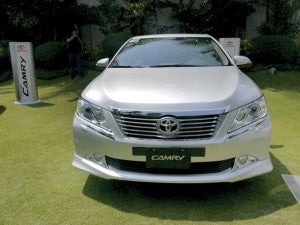 Figures on paper, however, can only compare so much. Only on actual, street-level tests and actual ownership costs can it be revealed which outdoes the other. New Cars Online, which test drove both, cited that due to its greater rear head- and legroom, backseat passengers would be able to stretch out a lot more in the Toyota Camry than in the Suzuki Kizashi. Offering just a little more front head-and legroom—than the Toyota Camry, drivers may find the Suzuki Kizashi a little roomier and somewhat more comfortable. (It must be noted, however, that most likely, New Cars Online test drivers and passengers were considerably taller Caucasians. The roominess factor might change significantly when Asian body types try out the Kizashi). In terms of cost, there are a number of factors to consider when calculating the overall cost of a vehicle—including the long-term ownership cost of maintaining the vehicle. The main consideration would have to start, of course, with the Manufacturer’s Suggested Retail Price (MSRP).