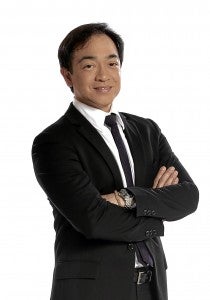 MANILA, Philippines—He is a multitasking marketing guy who loves animals, art, vintage cars and woodworks. But what Joel Marcelo Gozon Jimenez—or simply “Joe” to family and friends—doesn’t exactly relish, is being tied to a 9-to-5 corporate job. This is why he has semi-retired from GMA Network, which his family partly owns, to pursue more entrepreneurial ventures.

The entrepreneurial spirit is in his genes, being the second son of Menardo Jimenez, president of GMA 7 in the 1990s, who has also built an array of other businesses over the years.

Until last year, the younger Jimenez was senior vice president at GMA Marketing and Productions—the unit that sells available airtime of GMA’s multiplatforms to advertising clients. Aside from TV and radio, the other platforms include QTV, Regional TV and the international channels PinoyTV and LifeTV.

He also helped organize the parties and events that supported airtime sales. These were “the” parties that people talked about, he says. He was likewise involved in Kapuso’s multi-city concert tours in the United States.

Jimenez was also SVP for sales at QTV (Channel 11), originally started in 2005 as a channel catering to the middle-class market with focus on women. Recently, the channel’s market has expanded to include a more general audience. Part of its programming now includes anime, reality shows and Koreanovelas, but the cooking and wellness shows are still around. 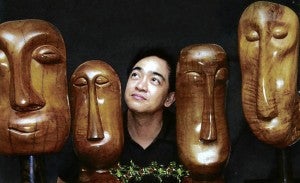 THE MAN and his art

“I didn’t want to retire when it’s time to retire,” says the 47-year-old Jimenez. “It’s more intriguing that way. I also felt that there are other things I want to do and can’t do them being an employee and, in fairness to the network, if I didn’t have a 9 a.m.-5 p.m. corporate, there are many more things I can do.”

But while he has given up day-to-day management work at GMA 7, Jimenez is still involved at the strategic level, as director and executive committee member of the broadcasting giant.

“I’ve always been a marketing person, it’s just so in my blood,” he says.

Jimenez has always surrounded himself with pets since he was a child (interrupted only when he went to the United States in the 1980s, getting his bachelor’s degree in business administration at Loyola Marymount University in Los Angeles, California). 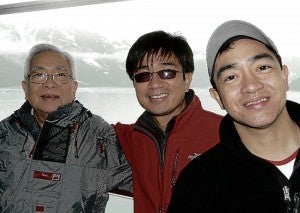 JIMENEZ (right) with his dad and brother.

These days, he has over 20 parrots at home and about a dozen tortoises crawling on his lawn (which visitors sometimes think are just rocks until they start moving).

He is a founding member and broad trustee of “Friends of Manila Zoo,” a foundation tasked to rehabilitate the zoo, to source funds, prepare marketing and public relations plans to promote the image of the Manila Zoo to world-class standards.

In 2009, he found an opportunity to turn his passion for animals into a business when he acquired a controlling stake in Kinder Zoo and Adventure Jungle, a privately operated half-hectare facility inside Manila Zoo where visitors can pet animals and enjoy outdoor activities like swimming and wall climbing.

The former partner of Kinder Zoo sold out because the facility couldn’t seem to make money. When Jimenez stepped in, he improved the facilities, increased the entrance fee and established satellite businesses, like a photo-op booth at Tagaytay’s Picnic Grove.

“Now it’s making money, doing much better than it was before. And when I look around, I still try to think where we can derive more income from,” he says. 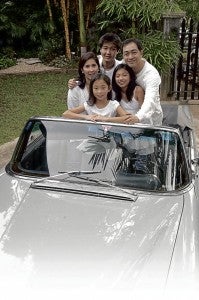 Jimenez and his family aboard one of his vintage cars.

While he likes taking care of animals, Jimenez believes in looking after the welfare of Kinder Zoo employees.

“I always feel when you keep your employees happy, they work hard, work really early. They’re not demanding. When there’s money, you share it with them. Pag meron, lahat meron, Pag wala, e di wala (when there’s something, everybody gets a share; when there’s nothing, nobody gets anything).”

This love for animals started when he was a child, when he kept rabbits, guinea pigs, aquarium and dogs in his dad’s house. When his family was about to move to a new house in Dasmariñas from Palanan, Makati, in the early 1970s, the young Joe cried and refused to leave the house until his parents agreed to bring his pet duck to the new house.

When he acquired his own house, he filled it with a collection of parrots. He even had a Hyacinth Macaw parrot from Brazil, known as the largest in the world.

His dad was his neighbor, and the elder Jimenez would complain and complain to him but would never squeal to the homeowners’ association.

But when his dad moved to a new house, thus ushering in a new neighbor, Jimenez had no choice but to bring the noisy parrot to the Kinder Zoo. Another exotic pet in his ward is a Toco Toucan.

Does his kids love animals too? “Yes but I think not as much as I,” he said.

Apart from Kinder Zoo, Jimenez also has a 20-percent interest in the Mojo Sandals business of his friend Joey Cuerdo.

Jimenez also partnered with his brother-in-law Edwin Roceles in a real estate development project in Antipolo. He’s also involved in the restructuring of San Carlos Bioenergy, a bioethanol project in Negros Occidental.

Apart from animals, Jimenez has a passion for beautiful things. He started collecting the pieces of renowned Filipino glass sculptor Ramon Orlina in 1995, and has now over 30 pieces. 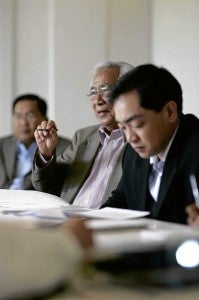 The executive at work.

Jimenez also keeps some “toys for the big boys.” For instance, he has a top-down 1960s Mercedes Benz Cabriolet that won second place in the Concours d’Elegance car show at Sofitel a few years back. His other vintage car is a smaller SL-class Mercedes “Mister Slim.”

Jimenez hangs out with a group of fellow vintage car enthusiasts, and will sometimes drive to Subic or Sta. Rosa.

“My 20-year-old son Jaime, he could pretty much drive any car I have except the two old ones,” he said.

When his daughter Bianca was 12 (she’s now 16), she made him pledge that he would give one of the vintage cars to her one day. This early, she has chosen the car she wants to use when she becomes a bride.

He also loves wood and recently taught himself wood-turning—making a bowl using a wood-turning lay.

“I’ve told my wife (Gidget), better warn your family they are getting wood for Christmas,” he says.

To stay fit, Jimenez goes to the Manila Polo Club at least twice a week to play squash, which he finds to be a great stress reliever.

“Like my dad, I’m really also an entrepreneur. I look for ventures left and right, make bets on people,” he says.

He described his dad as “very charismatic.” But he adds that his dad can get really mad, such that he would have to ask his secretary what the “weather” was.

Jimenez has summarized the nuggets of wisdom he received from his dad:

“If you want it done right, you have to get it done yourself;”

“You have to be fair to partners and to whoever is dealing with you;” and,

“Paddle your own canoe.”

On the first point, he says sometimes it’s difficult to get involved when there are too many things on your plate, but notes that, in the case of his dad, he still pores over the spreadsheets himself to make sure things are turning in the right direction.

On being fair, Jimenez adds: “My dad is a Christian. It’s really lifting things to God, praying that the decision you made is pretty much the right decision.”

Finally, he says “paddle your own canoe” has become a mantra among the Jimenez siblings. His brother Butch has been with the Philippine Long Distance Telephone Co. for a long time and their sisters have likewise pursued their own path.

“Seek your own way to make a living,” his dad would say, and that’s exactly what he has done.