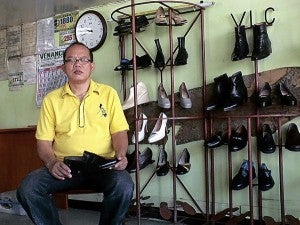 VENANCIO Medina in his workshop

DAGUPAN CITY— Nowadays, designer shoes are readily available for the well-heeled, while cheap footwear from China have protected the soles of the ordinary folk. But a local store offering made-to-order shoes continues to thrive despite the competition.

And it’s not because the store owner, Venancio Medina, 55, looks and moves so much like President Benigno Aquino, including the way he tilts his head and smiles, but it is because the leather footwear he produces are of high quality and reasonably priced.

Medina and his wife, Mercedes, are from Tarlac and started their shoe business in 1993, three years after Dagupan was devastated by the July 1990 killer earthquake.

Medina says he used to design shoes for his uncle who owned a shoe factory in Tarlac. He later worked for shoemakers in Baguio City. But after being an employee for several years, he decided to strike out on his own and chose to start his business in Dagupan.

At that time, the Chinese imports had yet to flood Philippine markets and a major local shoemaker’s business was on the wane. Thus the timing was perfect for Medina to enter the scene by opening the Venancio Leather Collection on Rizal Street. 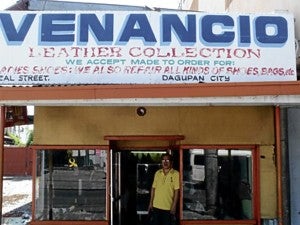 THE VENANCIO quality leather shoes store has managed to stay alive despite onslaught of malls.

“I displayed some of the shoes I designed and made and soon, I was getting orders,” he says.

He did not advertise the business and relied on word-of-mouth to spread the news about his shop.

“Those who had tried our shoes recommended us to their friends and relatives. Previous customers always put in a good word for us. Whenever there are new, hesitant customers in the store, our old customers would encourage them, saying it’s sulit (worth it),” he says.

Medina says the business suffered when cheaper shoes made in China started to enter the Philippine market. “Tinamaan kami (We were affected),” he admits.

But it proved to be a temporary setback, as the customers he lost slowly returned.

“Soon, our customers, unsatisfied with their China-made shoes, came to us, asking us to repair them. Then they came to order shoes from us,” he says.

There used to be a time when more men were placing orders for custom footwear, but women soon sought him out to have their shoes made.

“Usually, the husband arrives to buy a pair, but since the wife is with him, she also orders for herself,” Medina says.

When customers arrive at their store, Medina or his wife would ask if they wanted shoes for daily use or for formal or office wear, or even for dancing. 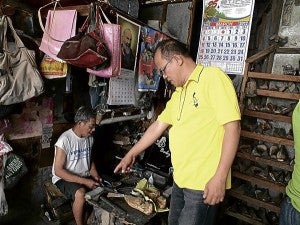 MEDINA instructs one of his shoemakers.

There are catalogs from which the customers may select a design, although some customers bring a photograph of the shoes they want copied. Sometimes, they would ask for designs to be altered, like asking for a higher heel or a wider strap, and Medina would gladly oblige, even giving suggestions on how to improve the design.

Medina sells a pair of leather shoes for men for at least P2,000 while ladies’ shoes are sold for at least P1,500. Leather boots cost more.

But almost 20 years since the Medinas started their shoe business, it is still considered a “family affair,” as their five workers are their relatives. It is also his wife, Mercedes, who entertains clients when Medina is busy at the workshop.

The business has sustained the family’s needs throughout the years,  enabling them to send their four children to school. Two have earned their degrees while the two others are in college. They also sent a nephew to college.

While he is doing well in the shoe business, Medina laments the slow death of the local shoemaking industry because of cheap footwear from China.

He thus commended Marikina City Mayor Del de Guzman for his efforts to revive the shoe industry in the country’s shoe capital.

In November last year, Medina says De Guzman, after learning that he, a shoemaker from Dagupan City, is a lookalike of Mr. Aquino, invited him to grace Marikina’s Sapatos Festival.

“I was garbed in the President’s favorite yellow shirt, had presidential security guards and I delivered a speech. People were really amused,” Medina recalls.

He did not mind the curious stares and laughter, saying that being in that event was his own small way of helping save the country’s dying shoemaking industry.