From Nokia, something luminous and nice | Inquirer Business

From Nokia, something luminous and nice 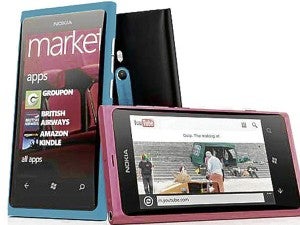 To say that Nokia has a lot on the line with the release of its new Lumia phones running on the new Windows Phone mobile operating system may be an understatement.

When Nokia announced its partnership with Microsoft to churn out millions of mobile phones, enabling both firms to gain a significant foothold in the mobile sector—something they so desperately need—the world held its breath for a moment. Meanwhile, Apple and Android carried on and created even more “insanely great” devices.

Understandably, expectations have to be high with the new Lumias. A unit recently arrived here at the Inquirer office: The Lumia 800, offered exclusively in the country by Globe Telecom (Smart Communications has the Lumia 710 and 900).

After two weeks of testing, the verdict for the new Lumia is out: Nokia finally may have made a winning smartphone on their hands.

At first glance, most people may think that the new Lumia looks almost exactly like the old N8 and N9 phones that ran on the Symbian OS. Depending on someone’s taste, this can be either good or bad.

What can be said about its design is that, thanks to the curved sides, it feels better in a person’s hand than the boxy iPhone 4S.

The “Gorilla Glass” screen may be considered a selling point for any device. But what the Lumia does do better than any other device is the screen’s uncanny ability to resist fingerprints. Goodbye annoying screen protectors.

With a 3.7-inch display, it seems that the guys at Nokia had consumers’ convenience at the top of their minds—they came out with a smaller display and shunned the impulse to impress everyone by producing large 4-inch plus screens like what Samsung and HTC had done with their phones.

Again, people will either welcome this or consider it a letdown. On one hand, a smaller phone is handier and more mobile. A bigger screen, though, is great for photos, videos and browsing.

The Lumia’s better half, of course, is the Windows Phone OS. And wow, is it stunning. It takes a little getting used to, especially if you’re used to the Android or iOS systems. But once you get used to it, it’s hard to ever go back. No other OS is as aesthetically pleasing as the Windows OS.

Apps like Facebook and Twitter, which once looked great on iOS and Android, go up several steps in sexiness on Windows. Heck, even the basic e-mail application looks seductive.

With a 1.4-gigahertz Qualcomm Scorpion processor and a Snapdragon chipset, the OS runs Lumia smoothly.

But there’s a drawback to Lumia and that is its camera. Yes, it has 8 megapixels and a Carl Zeiss lens. But the colors just don’t come out right, which may turn off photo enthusiasts. Simply put, what you see on your screen before taking a photo is different from what you get after you click that virtual shutter button.

Still, we think the Lumia can be a great contender in today’s tough smartphone market. Is it enough to be a winner in a field of iPhones and Androids? Why not?