Most Filipinos have no bank accounts—BSP survey 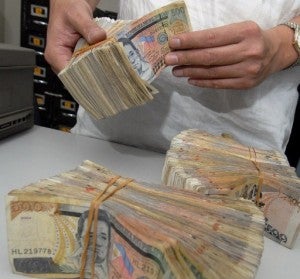 A bank teller prepares stacks of P500 denomination for the bank’s automated cash dispenser in this file photo. About 8 of 10 heads of Filipino households do not have any bank accounts because they do not have enough money to deposit, according to a survey by the Philippine central bank. AFP PHOTO/ROMEO GACAD

About 8 of 10 heads of Filipino households do not have any bank accounts, and most do not have enough cash saved up for emergencies.

These are some of the highlights of the first Consumer Finance Survey (CFS) conducted by the Bangko Sentral ng Pilipinas. Monetary officials said the results of the survey underscored the pressing need for the banking sector to reach out to more Filipino consumers and teach them the value of saving.

Based on the survey, most respondents who said their families did not have any savings accounts also saw no need to apply for any type of bank account because they would not have enough money to deposit. Other reasons cited were the high amount of minimum deposit balance required by banks and the aversion of most respondents in dealing with banks.

These results may be traced partly to insufficiency of income. Also, lack of access to banks and the high tendency of Filipinos to spend—rather than save or invest—greatly influenced the results of the survey, the central bank said.

BSP Governor Amando Tetangco Jr. said in a press conference Wednesday that the survey revealed the need for greater effort “towards a more inclusive financial system,” where more people would have access to bank products and services, such as deposits and loans.

Such an effort is necessary, Tetangco said, if the government hopes to reduce poverty incidence.

He pointed out that the public’s savings are what the banking sector uses to extend loans to fund job-generating investments. Moreover, loans granted to microenterprises serve to lift the income of most poor people.

Tetangco said results of the survey also raised the need for tighter monitoring of financial transactions of consumers outside the formal banking sector.

The survey showed that some Filipinos are inclined to deal with informal moneylenders, which may include loan sharks, to finance their needs. One of 10 respondents said they have dealt with moneylenders.

“There is a need to look into shadow banking transactions,” Tetangco said.

BSP Assistant Governor Ma. Cyd Tuaño-Amador said that currently, the government has no sufficient resources to regulate individual moneylenders. She said, however, that what the BSP can do at the moment is to strengthen its financial literacy campaign by making people aware of the risks in dealing with informal lenders.

“Education of the public may help a lot in consumer protection,” Amador said.

Another interesting result of the survey is that 2 of 10 Filipino households depend solely or partly on remittances to support their expenditure requirements, indicating the importance of overseas Filipino workers in financially supporting households in the Philippines.

Moreover, 7 of 10 Filipino households are not risk takers, prefering to rely on fixed income rather than invest in businesses.

The survey, which took a few years to complete, covered 10,520 households nationwide. Data was collected from November 2009 to January 2010.