The Arena elevates viewing to a new level 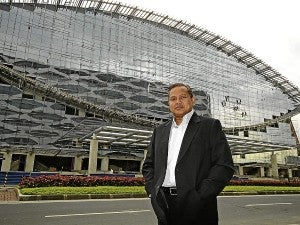 EDGAR Tejerero, SVP of West Avenue Theatres Corp., stands in front of the eye-shaped facade of the soon-to-open Mall of Asia Arena. PHOTO BY ANDREW TADALAN

This June, the newest attraction on the block will open its doors (and “eyes”) to the public.

The Mall of Asia Arena, touted to become the country’s premier events venue, will host world-class entertainment and sporting events.

“It’s part of the Mall of Asia master plan… The Sy family (headed by taipan Henry Sy Sr. of the SM Group) really wanted to have an integrated, complete shopping and entertainment complex,” says Edgar Tejerero, senior vice president of West Avenue Theatres Corp., the managing arm of the Arena.

Aside from the Mall of Asia, now one of the country’s leading shopping destinations, the MOA complex also houses the SMX Convention Center, offices (One E-com and Two E-com), SM Residences, and the soon-to-rise hotel, Radisson Blu.

“So the next missing component is an entertainment infrastructure to accommodate a good number of people, that’s why the Mall of Asia Arena came about,” says Tejerero. “Plus, if you’ll look at the geography of the different entertainment venues, there’s only one large      venue, the Smart Araneta Coliseum. And they belong to the other side of town and we belong here in the south. So in terms of existence we can really coexist.”

The MOA Arena was constructed in 2010 for about P3.6 billion. It’s made of glass and has an eye-shaped façade.

“We really spent a lot on the aesthetics of it. It’s really an eye or double-eye (one in the front and the other at the back) design because all the events we want to have inside would be a feast on the eye,” he says. 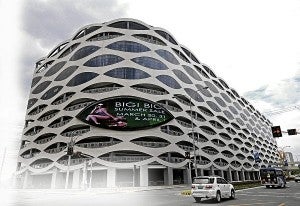 The Sy family is very much involved in the project. In fact, according to Tejerero, Hans Sy “is very much into the details of the construction, and has a vast experience in staging a lot of shows with SM Concert Grounds. He’s very much familiar with how an act is staged. He’s also very much into sports as the family now owns the National University Bulldogs.”

Tejerero shares that Hans Sy was a guest at the recent NBA All-Star Games and “he saw how an event is being done there and he was really impressed. We already have a guide on how to do an event but he made it better.”

Tejerero emphasizes that it is also their commitment to promote local talents and vowed to feature the country’s top caliber artists in its grand opening on June 16.

“We just want to be consistent with the principle and belief of Henry Sy Sr.—that he believes in the world-class talents of the Filipino artists,” he adds.

The five-level Mall of Asia Arena is the new home of the UAAP and the NCAA. It will have a seating capacity of 16,000, and a full house capacity of 20,000. It will also be equipped with cutting-edge technology and world-class amenities.

It boasts of floorings by Robbins Inc., Spalding basketball goals, Daktronics scoreboard—similar to what the NBA is using—and an LED ribbon boards surrounding the 3rd and 5th floors. 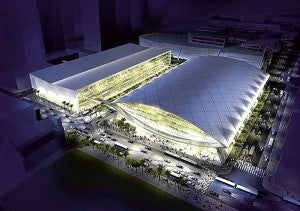 THE ARENA is set to become the home of world-class entertainment and sporting events. PHOTO BY ANDREW TADALAN

There are press rooms, meeting and greeting rooms for press conferences, and four dugouts.

There are also nine loading bays to make ingress-egress of food and container trucks easy.

Escalators are available in every level for the patrons’ convenience. There will also be 16 well-designed smoking lounges. The Arena is also Wi-Fi-ready, and has PWD access lanes.

Another unique feature is the Corporate Suites—these are private rooms with its own restroom, mini bar, sofas and a private gallery with cinema seats. Occupants will be entitled to a season pass for all the shows in the Arena.

“We have 31 for lease on a long-term basis called Premier Suites and we have 10 on a per event basis called Events Suites,” Tejerero says.

The suites can go for one- to 5-year leases depending on the company and would cost about P9 million to P12 million.

“That’s what really makes Mall of Asia Arena a lot different from other venues not just in the country but in Southeast Asia, because we haven’t seen a venue in Southeast Asia that has Corporate Suites similar to that in the United States,” says Tejerero. 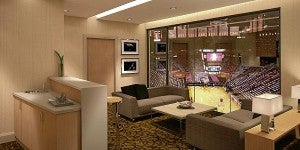 CORPORATE Suites are leased for P9 to P12 million. PHOTO BY ANDREW TADALAN

Unlike suites that are normally located in the highest level of a stadium, the Mall of Asia Arena’s Corporate Suites are located just above the lower box section.

PLDT, Banco de Oro and SMIC are among the big companies who have already secured spots.

Tejerero says that “unlike other venues wherein upper box and general admission would take 60 percent of the seating capacity, we reverse the seating ratio and we give more priority to patron and lower box sections in the MOA Arena’s case.”

A plug-and-play setup is also available for broadcasting, so thus live beaming to remote areas.

“Our theaters are already equipped to receive live beam so if you have an event here and you want to involve those in Davao, Cagayan de Oro, Bacolod or Cebu, we can ‘live beam’ it and our signals will receive it so they can watch the concert on widescreen,” he adds.

Patrons have an array of food choices as the MOA Arena houses two restaurants: One located at the second level and will be run by the Manila Hotel group, and a private restaurant run by Discovery Suites at the third floor. There’s also a Hawker’s Alley, a food court-like area sans seats but has about 200 cocktail tables.

“We want our patrons not to just buy and eat anywhere else. That’s why it’s our policy to open the Arena two hours before the show to give time for patrons who like to take a light snack. And we also encourage the restaurants to still be open after the show,” says Tejerero, adding that they also want the Arena to be a food destination so the food establishments are tasked to develop a special menu exclusively for the Arena.

The Arena is equipped with CCTV cameras, police desk, a clinic and a standby ambulance.

“We’re using turnstile to make sure that people are legitimate ticket-holders, and hand-held scanners to ensure everybody is seated in their proper seats,” Tejerero explains.

Ample exit points are also provided to ease the flow of exiting patrons.

Several shows are in the can including two concerts prior to the grand opening—pop diva Lady Gaga on May 21, and  the joint concert of the Backstreet Boys and New Kids on the Block on June 3. The world-renowned Cirque du Soleil will also perform in August.

“It’s also our commitment to promote each and every event in the Arena whether it’s in the SM cinemas, the malls, and we’re even coming out with an events guide,” Tejerero says.

The Mall of Asia Arena promises to give an all out entertainment experience to its patrons and live up to its tagline: We change the game. We elevate the entertainment.

Read Next
Beekeeping is alternate livelihood for La Union’s tobacco farmers
EDITORS' PICK
Cherry Mobile teams up with Cloud Panda PH, launches online store
DOH: COVID-19 mortality doubling time, transmission rate down
Someone from the Philippines can become $356 Million richer this Tuesday
Leveling up your ‘lutong bahay’ with the kitchen companion you never knew you needed
Congress urged to extend session for approval of COVID-19 response bills
Amid protests, Trump talks of war — and reelection
MOST READ
Binay dares DOTr execs to commute to work during GCQ
51 percent of German firms holding back investments in PH, but not because of COVID-19
Cole Sprouse arrested while joining peaceful protest against racism
Chaos as thousands return to work in Metro Manila
Don't miss out on the latest news and information.