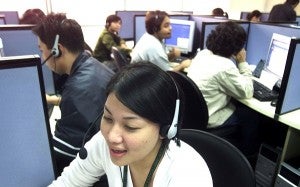 The Philippines generated $11 billion in revenue from the fast-growing information technology and business process outsourcing (IT-BPO) industry last year—24 percent higher than a year ago.

In a statement on Wednesday, the Business Processing Association of the Philippines (BPAP) also announced that the industry employed 638,000 by the end of 2011—22 percent more than that of the previous year.

“We hit the targets projected in our Road Map 2016,” said new BPAP president Benedict Hernandez. “This is a good start to our five-year plan to grow at an average of 20 percent a year—above the projected global annual growth rates of 10-15 percent.”

At a compounded annual growth rate of 20 percent, the Philippine IT-BPO sector is set to become a $25-billion industry by 2016, contributing about 9 percent to the Philippine economy and capturing 10 percent of global demand, Hernandez added.

The biggest component came from voice outsourcing, which accounted for 65 percent of total business. The Contact Center Association of the Philippines (CCAP), also headed by Hernandez, reported that the sector ended 2011 with 416,000 employees providing $7.4 billion in services to the world. Already the largest contact center hub in the world, the Philippine sector grew by 21 percent in 2011.

Another segment, Philippine Software Industry Association, reported a 37-percent growth in revenue from IT outsourcing, while employment expanded by 11 percent in 2011.

Another segment, the Game Developers Association of the Philippines, announced that the game development segment grew by 13 percent in 2011, with revenue reaching $8 million while employed workers topped 1,400.

Companies providing engineering services also saw a 5-percent increase in revenue and employment ending 2011, with more than 9,000 employees providing $172 million worth of services.

This was the second consecutive year of positive growth for the segment after it saw a contraction in 2009, reflecting a recovery in global markets for construction and engineering design.

Also, the non-voice business process and knowledge process services grew by 24 percent in 2011 to over $2 billion in revenue. The segment employed a total of 130,000 by the end of the year.