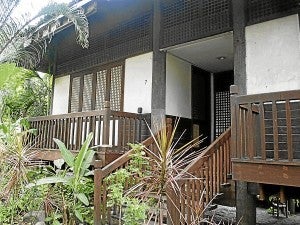 ALL the nine houses at the Artists’ Village had fallen into a state of disrepair some even need to be demolished. Photo by Charles E. Buban

IT’S HARD to imagine that this community located a few hundred meters behind Trinity University of Asia in Quezon City and bounded by Diliman Creek was once a haven to artists from all over the world.

Their works could still be found around this one-and-a-half-hectare property, standing tall like forgotten monuments.

Even the nine residential houses around Artists’ Village are works of art in themselves considering that our national artist for architecture, Leandro Locsin, was the one who designed them.

“His idea behind the homes at Artists’ Village (also known as Sambalikhaan) is to pay homage to Filipino architecture. The houses that all stand on stilts were inspired by the houses found in Ifugao and Mountain Province. On the other hand, the capiz that adorn the windows and doors were of course from the bahay na bato during the Spanish colonial era. The use of balcony from the rural bamboo and nipa house that could still be found in some parts of the Philippines,” enumerated by Ymmanwel Rico Provinio, a journalist-artist who currently lives in one of the houses.

Provinio considers himself lucky because his house is currently one of the handful of residential structures that could still be safely occupied. The rest have remained unoccupied for years and are already showing massive termite infestation, have brittle if not rotting walls as well as leaking roofs.

Time has not been kind 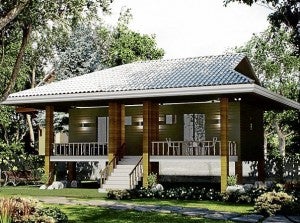 SKETCH of what architect Sicam conceived to replace the existing houses at Artists’ Village. Photo by Charles E. Buban

“Time has not been so kind. In fact, the elevated wooden walkway that connects a number of the houses here gave way a long time ago replaced by one made of concrete, which while no longer impressive is more sturdy and long lasting,” Provinio lamented.

Indeed, this is now the challenge for Provinio, who together with a number of concerned artists, plans on restoring Artists’ Village to its former glory.

“It’s been 20 years and the place needs refurbishment. The Episcopal Church in the Philippines, which owns the property, is excited about the idea,” Provinio said.

When an invitation to revive the place was recently announced, architect Romeo Sicam was among the early volunteers. “Locsin was my icon and my inspiration and to me, it would be a privilege to be involved in the restoration of a property created by a national artist. I am already excited,” Sicam said.

Because of concerns about safety, all the existing houses will have to be taken down as well as employ contemporary building materials.

According to Sicam, the objective is to have houses and structures that should stand the test of time.

“Wood is beautiful but unfortunately, they don’t last as long as the other contemporary materials. The good news is that there are a number of ways that could make a house that use contemporary materials but still look traditional, just like what Locsin wanted when he built Artists’ Village house in 1992,” Sicam explained.

“Stilts are important part of the design considering Locsin already considered the fact that the creek may overflow one day, which did happen when Tropical Storm ‘Ondoy’ struck in 2009,” Sicam explained.

Based on his design, each house would cost at least P2 million and to complete the redevelopment of the Artists’ Village, the stakeholders will require at least P20 million.

“The challenge now is for us artists here to seek patrons (financial supporters) of the arts. we only need to impress upon them the significance of this place and how the Artists’ Village could once again be a haven with fine art installations, live exhibits and performances,” Provinio said.