Countdown to 2015: It’s full throttle ahead for PH’s best bet for F1 glory 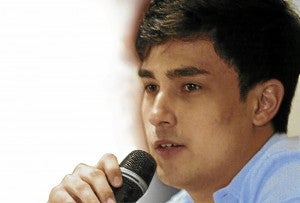 MARLON: Dream to reach F1 would take around three to five years

Marlon Stockinger, at the ripe age of 20, is hell-bent on making it to Formula 1. At the GP Barcelona test at Circuit de Catalunya in Spain, where the 10 best times of Grand Prix 3 drivers were posted March 12 and 13, Marlon’s best position was fifth.

In an online interview with the Inquirer weeks before the race, Marlon said that he “fully concentrates” for the upcoming GP3 season. “It is crucial for my further career in racing, which hopefully would lead me via GP2 or World Series by Renault (the next steps after GP3) to F1.”

Marlon estimated that the ultimate dream to reach F1 would take around three to five years. He also mentioned of other “fantastic opportunities in motorsports, such as the German DTM (German Touring Car Championship) or all the American championships like Indy cars.”

Status Grand Prix’s GP3 Series continued its preparations for the season ahead at the official test at Circuit de Catalunya, with three of the team’s drivers, including Marlon, posting top 10 times during two days of running at the Barcelona track.

GP3 (Grand Prix 3) is a new category where young talents from all over the world experience the Formula One tracks in Europe. Marlon races on the same tracks, and on the same weekends, as those of F1 drivers and their European F1 calendar, which includes for the first time the most prestigious race of all: the Monte Carlo, Monaco Race.

Marlon was testing in Estoril, Portugal, for the coming GP3 season at the time of this Inquirer Motoring interview.

“So I am going to be the first Filipino race driver to ever run a race car through the narrow streets of Monaco. It has a little bit of a Hollywood feel to it. What a thrill!” he said.

“I am constantly traveling between Manila, Zurich, Switzerland, and the United Kingdom. During the European season I spend some time in Switzerland, where my grandmother lives. My dad is Swiss, my mom is Filipino. My racing team, Status Grand Prix, is based in Silverstone, England, so I have to spend a lot of time there to prepare the car for the season together with my racing engineer and my mechanics. Since this season I am also part of the Lotus F1 Team junior drivers program (formerly Lotus Renault F1 Team), based in Enstone, United Kingdom, I am spending quite a lot of time there using all the special equipment for fitness and reaction training. I also have coaches for fitness assigned to me. I am able to use the same facilities as the Lotus F1 drivers Kimi Raikkonen and Romain Grosjean.”

Marlon’s mom, Egin San Pedro, and his dad, Tom Stockinger, are both in business. Marlon described them as both young at heart and good-looking, especially his mom, who used to be a model. His sister Audrey, 18, “is beautiful and very intelligent. She has plans to study in England.” His younger brother Alex, 9, is “extremely funny.”

“Unfortunately I don’t see him so often now when I am away from home. I was born and raised in Manila. My province/ancestral home are in Bulacan and Parañaque,” Marlon revealed.

“My dad used to race go karts in the Philippines with his friends. One day, of course, they sat me in one of these … and that was it! I then did karting for seven or eight years, first in the Philippines and then in Asia and Europe. I think I was 9 or 10 years old when I started.”

Marlon said he did not have any concrete offers to join show business, but people have been asking him about it.

“It would certainly be an interesting career change! Right now, of course, my schedule is determined by the F1 calendar and that has priority. Besides that I am pretty flexible and enjoy coming as often as I can back to the Philippines,” he said.

Last season was his first GP3 race, and he assessed “it did not go as well as I had wished.”

“I had to learn a lot and made mistakes. But I also had a streak of bad luck. In Barcelona, I qualified in third place but was later disqualified for a minor technical infringement. The clearance between the car’s floor and the road surface was 5 mm too low at the back of the right side of the car which was kind of tough by the FIA scrutineers. But rules are rules. I was then relegated to the end of the grid and had quite a sensational crash.

“I think you saw it all on TV—when (I came) crashing into the Swiss driver Nico Muller, who had stalled on the grid. Coming from the back I couldn’t see him, since several drivers were dicing in front of me. Insult to injury was the comment of a German TV journalist on the Eurosport channel saying that I had already been noticed as a driver with bad habits, which was absolutely not true.”

Marlon would now rather look forward than back. “I am now with a new race winning team, Status Grand Prix, and our testing last October/November went very well. I was always up there in the top five. I am looking forward to the pre-season testing which is about to start.”

Marlon surmised that “one has to realize that the GP3 grid last year was probably the most competitive in the world. Twenty of the best young drivers in their category were competing against one another. Some were already F1 reserve drivers, like Valtteri Bottas from Finland, who won the series.”

Marlon also recalled a friend of his dad named Martin Reiss who was in charge of the young drivers’ program and sponsor procurement for the Lotus F1 Team. Marlon narrated that one night at Nuerburgring in Germany, his father had dinner with Reiss and Eric Boullier, the Lotus F1 Team boss.

Marlon said that his dad, rather boldly, asked Eric Boullier whether he would be willing to have a one-on-one conversation with Marlon and then offer his opinion whether it would still be worthwhile to support Marlon in his racing endeavours.

“Martin brought me to the F1 paddock and we talked for a full hour during the Hungarian Grand Prix last year. I was quite nervous at first, talking to an F1 team boss for the very first time in my life. However, our conversation went quite well and although my results weren’t great, Eric kind of seemed to like me and said I should be given a chance with a top team. That’s how I got accepted into their young drivers program. Of course this is still light years away from anything like F1 and I have to prove myself now. If I show good progress they might take me on and further my career towards F1,” said Marlon.

Asked if he already was on the world’s racing radar: “I race at the right venue, F1, which means we are noticed, since all the F1 teams see us racing in the mornings or afternoons. My championship is tough. Not all the drivers have signed up yet for this season, but we are the world’s best 20 odd open wheel race car drivers out there in our series.”