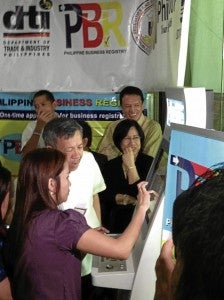 It’s not fun to register a new business in the Philippines, given the legendary bureaucratic red tape that applicants must cut through.

No wonder then that in the latest World Bank competitiveness survey, the Philippines ranked 136th out of 183 economies in terms of ease of doing business.

After all, it takes weeks to collect from different government agencies the documentary requirements needed to register a business.

The plan is to roll out a few hundred workstations offering real-time and “hassle-free” business registration in the offices of the DTI, Securities and Exchange Commission and some local government units (LGUs).

The PBR accepts registration for sole proprietorships as well as partnerships and corporations.

A PBR workstation was recently set up at the SEC head office in Ortigas and the plan is to put one in each of the seven offices of the corporate watchdog.

During the launch of the PBR at the SEC, Trade Secretary Gregory Domingo said the system would also seamlessly hook up with the SEC’s registration process to benefit those registering as a partnership or corporation.

Like the single proprietors, partnerships and corporations need to secure documents from the SSS, PhilHealth and PagIBIG, aside from getting the business name, incorporation papers and tax identification number from the SEC before they can start operation, and this is where the PBR comes in.

Through the PBR, the computerized registration systems of these agencies are interlinked so that applicants need not physically go to each agency to register their businesses.

For sole proprietors, walk-in application through DTI teller must follow the following steps:

1. Applicant fills out the PBR application form and submits to DTI teller for processing.

2. DTI Teller secures applicant’s TIN. (If there is an existing TIN, PBR will validate against records).

A Transaction Reference Number (TRN) is presented to Cashier for payment of BN fee.

Official Receipt of Payment is presented to the DTI Releasing Officer for the BN Certificate.

Applicant gets SSS, PhilHealth, and PagIBIG ERNs from DTI teller.

4. Certificate of Registration or employer ID can be secured from agencies upon presentation of PBR-generated ERNs.

For SEC-registered companies, walk-in application through teller at DTI Office or SEC must follow the following steps, but note that only partnerships or corporations already registered with the SEC can apply.

1.) Applicant fills out the PBR application form and submits to the teller for encoding and processing.

4.) Certificate of Registration or Employer ID can be secured from agencies upon presentation of PBR-generated ERNs.

Domingo expressed confidence that with the PBR as well as other reforms, the Philippines should rank among the top 50 when it comes to ease in doing business by 2016.

Each workstation costs about P250,000, and Domingo said the government is ready to invest in a few hundred of these machines to help spur business growth.

Domingo said the project actually started in 2006, but there was little progress. So when the new administration assumed office in July 2010, the DTI pushed for its more aggressive implementation.

“I thought it would be done in six months but it took much longer because it’s a very complicated system. We need to have real-time access to the computers of five different agencies and they have five different systems requiring different protocol. So it took a while to settle down,” he said.

With the PBR in place, Domingo said the government will now turn its attention to implementing other reforms designed to make it easier for businessmen to do business in this country.

To support these efforts, SEC chairperson Teresita Herbosa said the SEC had launched its own “green lane” processing unit, tied up with the Land Bank of the Philippines and established an extension office in Tarlac.

This green lane, however, is not available to corporations whose subscribed capital is not paid in cash, those with more than 40 percent foreign equity and those with secondary license issued by the SEC.

Land Bank, meanwhile, is deputized to accept, pre-process registration requirements and collect the filing fee in its 329 branches.

“Secretary Domingo is an inspiration. This isn’t just for the purpose of a one-stop shop. It’s supposed to be part of a bigger data-sharing project among government agencies,” Herbosa said.

“Once we’ve reached that point that we’re sharing data and other information and we have statistics on what kind of businesses are being registered or terminated, we can use that data for economic progress,” Herbosa added.