Aquino says miners will have to pay 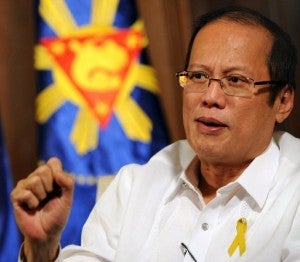 President Benigno Aquino gestures as he speaks during an interview with AFP at Malacanang Palace in Manila on Tuesday, March 20, 2012. Aquino said the government was trying to arrive at a fair percentage of revenues from mining firms. AFP PHOTO/TED ALJIBE

Aquino told AFP in an interview a review of the country’s mining policies was close to being finished, and the government would likely require all mining companies to start paying the government a “hefty” percentage of revenues.

Aquino said the government was looking at efforts by the Australian government to generate more money from the mining sector, where a 30-percent tax on extraordinary profits of coal and ore producers will start in July.

He said a 50-50 revenue sharing agreement was even being considered, although he emphasized the policy had not been finalized and refused to signal what percentage the government was hoping for other than a “fair share.”

The Philippines is believed to have some of the biggest mineral reserves in the world – the government estimates the country has at least $840 billion in gold, copper, nickel, chromite, manganese, silver and iron.

However, the minerals have been largely untapped, partly because of a strong anti-mining movement led by the influential Catholic Church, while poor infrastructure and security concerns have also kept investors away.

Aquino said the new mining policy would aim to regulate the industry much more closely and give certainty to investors.

But he signalled the government was not desperate to cash in on the global commodities boom, pointing out the mining sector played only a small role in the nation’s economy and created many environmental risks.

“They (miners) claim they contribute quite a big amount to the national economy but at the end of the day it’s really just two percent,” he said.

Aquino also indicated tourism was a much higher economic priority for the government than mining, which he said generally created only short-term economic benefits.

He said the government was aiming to attract 10 million tourists annually by 2016, up from four million currently, and that each visitor generated one job domestically.

“(But) once all of those minerals are extracted, that’s it. So if we go into gaining these resources on a temporary basis, we might be sacrificing the long-term opportunities for our future.”

Aquino said, under the new policy, mining would be banned completely from 78 sites deemed important to tourism, while other environmental restrictions would be imposed.