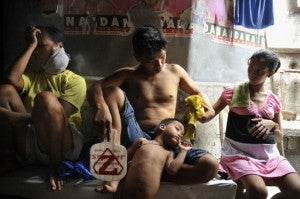 Jobless Philippine slum dweller Rommel Gonzales (center) attends to his son Earl Jairus and pregnant wife Marian Gonzales (right) while his sick mother Evelyn Gonzales (left) sits with them in a squatters' area in Nepomuceno street, a few blocks away from Malacañang, on May 12, 2010. Rogier van den Brink, lead economist of the World Bank, said on Monday, March 19, 2012, that although the Philippines has been enjoying favorable macroeconomic fundamentals, the structural problems make it difficult for poor people to uplift their situation. AFP PHOTO/ROMEO GACAD

High power rates and limited access to financing for small enterprises are among the structural problems that the Philippine government should address so that economic growth can translate into poverty reduction, the World Bank said on Monday.

In its latest quarterly report on the Philippines, the World Bank said the country had achieved low inflation, a sustained economic growth, a declining debt burden, a stable banking sector and a comfortable level of foreign exchange reserves.

But the country should work on graduating from merely achieving and sustaining macroeconomic stability to spreading prosperity to most Filipinos, the multilateral agency said.

“The government has done a really good job in achieving macroeconomic stability. But there are structural impediments that have to be addressed … to achieve a more inclusive growth and to reduce poverty at a faster pace,” Karl Kendrick Chua, World Bank country economist for the Philippines, said at a press conference.

Besides high power rates and lack of financing for small enterprises, Chua enumerated other impediments to poverty reduction—unpredictable regulations, uneven playing field for businesses in terms of taxation, high cost of and a tedious process in starting a business, and limited access to education and skills training.

Chua said the high cost of electricity in the Philippines was one of the reasons it was losing out in the competition to attract foreign investments.

“There should be measures to lower power rates,” Chua said.

He said the cost of electricity was one of the major considerations of businesses in deciding whether to invest in a country.

Awash in cash, the banking system should help in efforts to reduce poverty by extending more loans designed for the poor, Chua said.

“Policies to ensure affordable access to finance micro and small enterprises are needed to spur job creation,” the World Bank said in the report.

Another way to help the poor is to invest in skills training, which can give them the chance to improve their ability to get better-quality and thus higher-paying jobs, according to the bank.

“Moving to higher value-added production would require improvements in the supply and quality of skills,” it said.

The World Bank suggested that the government invest more in strengthening the capacity of the Technical Education and Skills Development Authority so that it can better achieve its mandate of helping increase employment through skills training.

The bank also cited the need for the government to partner with the private sector in improving the quality of graduates. The partnership can help narrow the gap between what employers need and what the skills of graduates are.

The World Bank stressed the importance of ensuring that the government successfully implement the K-12 program, which is aimed at helping improve the competitiveness of the country’s labor force.

The multilateral agency said the K-12 program, which extends the length of primary and secondary education from 10 to 12 years and requires kindergarten education, would help make the Philippine education system comparable with global standards.

Better skills will in turn attract more investments as multinational companies shift from countries such as China where costs are rising, Chua said.

He said the government was also advised to rationalize the tax system by withdrawing incentives enjoyed by some enterprises and by reducing the 30-percent income tax rate to align it with much lower rates in other countries.

He said a level playing field in taxation was needed to avoid turning off businesses.

The World Bank economist said starting up a business was much more tedious in the Philippines compared with other emerging economies, putting the country at a disadvantage in attracting job-generating foreign investments.

“In a scenario of a lingering global slowdown, domestic demand, in particular investments and government spending, will have to play a bigger role in achieving the country’s growth targets for 2012 and beyond,” Chua said.

The report said the global economic slowdown may affect employment in the electronics sector, which accounts for half a million jobs and indirectly supports several hundred thousand other jobs.

The World Bank is keeping its growth projection for the Philippines at 4.2 percent for this year (up from 3.7 percent last year) and 5 percent for next year, saying such rates are decent and comparable with other emerging markets.

Nonetheless, it said poverty remained a serious challenge for the Philippines.

Although the country enjoys favorable macroeconomic fundamentals, the structural problems make it difficult for poor people to uplift their situation, said Rogier van den Brink, the lead economist of the World Bank.

“[Poor] Filipinos still have difficulty accumulating wealth. For instance, it is difficult for people in the rural areas to get land and for [micro and small enterprises] to access credit,” Van den Brink said at the press conference.

“The bottlenecks have to be removed,” he added.

World Bank country director Motoo Konishi noted the progress the government had achieved but said it needed to act faster to get more broad-based support from policymakers, civil society and the private sector to benefit the poor.

“Besides having strong macroeconomic fundamentals, the country is benefiting from political stability and a popular government that is seen by many as strongly committed to improving governance and reducing poverty.” With a report from AP