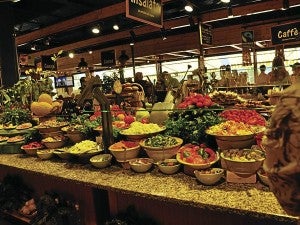 Science may now have the evidence to convince expectant mothers to eat even more veggies, and shun the meat altogether.

Neuroscientist Custer Deocaris, a Deparment of Science and Technology Balik Scientist who is now in Japan for further research on the human brain, has been urging pregnant women “to eat less meat,” or even go as far “go vegetarian.”

“This is consistent with the ADA [American Dietetic Association]) recommendation for the suitability of vegetarian diets for pregnant mothers,” Deocaris said.

Deocaris recently e-mailed Inquirer Science and Health a scientific paper that he recently got hold of indicating a diet predominant with meat could lead to fetal programming of genes involved in stress responses of the developing baby.

The author of the paper, Hamid Jan, showed that a vegetarian diet alters head circumference and birth weight among babies born in Malaysia (the study is titled “Higher intake of fruits and vegetables in pregnancy is associated with birth size”). He has expressed willingness to be interviewed by this writer. A three-way interview with Deocaris and Jan is currently being planned.

Deocaris initially explained Jan’s study: “This means, babies born to mothers who love meat become more stressful.” He added: “Babies with hyperactivated stress axis tend to grow up as adults who have difficulty managing their anger, are more aggressive and have higher risk for heart disease.”

Custer stressed that this maternal dietary factor has never been studied in detail in the Philippines.

“The HPA, or hypothalamic-pituitary-adrenal axis (or stress response), of the baby is altered by vegetable consumption by pregnant mothers. Obesity, too, can be programmed in the genes by maternal overnutrition. Weirdly, what you eat while you’re pregnant determines how your baby will eat when it becomes an adult.”

Do you have questions for Deocaris and Jan? Be part of the discussion: E-mail your questions and concerns at [email protected]