Philippines now competing with over 100 countries for BPO investments 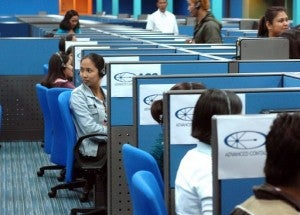 Photo taken in 2007 shows Filipino call center personnel attending to US client at a newly opened business process outsourcing office in Manila. Industry officials have emphasized the need for BPO firms to diversify into more complex services if the sector is to sustain its rapid growth, as they said over 100 countries are posing a challenge to the Philippines’ dominance in the BPO sector. AFP PHOTO/ROMEO GACAD

Many of the players that are moving in to steal market share away from the Philippines are in the country’s own backyard, such as Malaysia, Singapore and China, according to the Business Processing Association of the Philippines (BPAP).

“There are over 100 locations around the world where IT [information technology] BPO services are being offered,” BPAP head of research and industry veteran Gigi Virata said in a recent press conference.

“While we have our lead in voice services, we have to be more competitive in higher-value services,” she said.

The Philippines now ranks as the top call center service provider in the world, surpassing erstwhile leader India in terms of revenues and head count. Industry officials, however, have emphasized the need for BPO firms to diversify into more complex services if the sector is to sustain its rapid growth.

These include many back-office functions such as accounting tasks and the management of human resource systems that many corporations, in a bid to cut costs, have started to subcontract to companies in countries like the Philippines.

Proficiency in the English, which has been the Philippines’ main advantage over competitors, is not a key factor to success in non-voice services.

“It’s a very competitive world out there,” Virata said. “We encourage companies to be more efficient. They have to be more productive and they can’t just keep cutting costs by reducing salaries.”

“What you have to do is improve systems to identify redundancies, and come up with innovative ideas for better customer service,” she said.

The emphasis on improving quality, she said, has become a key priority for stakeholders to a point that in the upcoming annual ICT [Information and Communications Technology] Awards, a new category, “Quality Program of the Year,” was recently added.

She said eliminating redundancies would reduce the need to keep salaries low, allowing companies to retain the best talent while keeping costs competitive.

Virata said companies should also vie for certification by international organizations that have been recognizing corporate best practices. These include the International Organization for Standardization, or ISO.

“These are the sort of things that clients from places like the European Union demand from suppliers more than our traditional American clients might,” she said. “If we want to break in to new markets, we need to do this.”

There are currently 800 BPO companies employing over 630,000 people in the country today. Last year, the industry contributed over $11 billion in revenues to the domestic economy, up by over 20 percent year on year. This makes the BPO industry the country’s second-largest source of foreign exchange next to remittances from migrant workers.