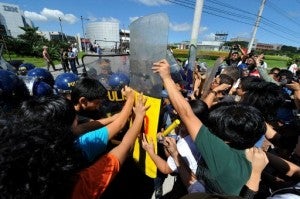 Philippine college students stand off with police officers during a rally in in Quezon City, east of Manila on December 1, 2010. The students demanded that the administration should not cut the budget for state universities and colleges. According to the World Bank, inequality in terms of access to higher education is problem that must be addressed. AFP PHOTO/NOEL CELIS

Deficiencies in higher education in the Philippines have kept it, along with other neighboring countries, from growing faster and becoming more competitive, according to the World Bank.

In a study, the multilateral agency said that there remains a significant gap between the labor requirements of companies and the quality of graduates produced by local colleges and universities.

This gap, which has long been observed, must be addressed to maximize the potential of higher education in  boosting the economy, said Emanuela di Gropello, World Bank lead economist and one of the authors of the study titled “Putting Higher Education to Work: Skills and Research for Growth in East Asia.”

The study points to the need for research that will help bridge the gap between what employers need and what higher education institutions produce.

This gap is most apparent in the services, export, and technology-intensive sectors, the study said.

“Employers in both manufacturing and services in East Asia and the Pacific, including the Philippines, are looking for problem-solving, communications, management and other skills that will support higher productivity,” Di Gropello said.

Also, inequality in terms of access to higher education is another problem that must be addressed. Although the proportion of the population going to colleges and universities has grown over the years, growth is concentrated on people belonging to higher-income households, the World Bank economist said.

Di Gropello said measures to address the inequality should include the grant of state scholarships and student loans.

Also, the problems confronting higher education are not peculiar to the Philippines, she said. The problem is being experienced elsewhere in Asia, such as Cambodia, Vietnam, Indonesia, Thailand and Malaysia.