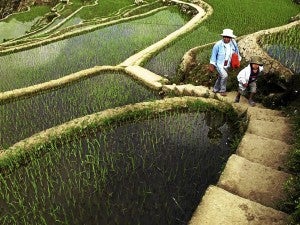 Good weather permitting, the Philippines may exceed its 2011 palay (unhusked rice grain) production target of 17.46 million metric tons and perhaps even beyond.

Agriculture Secretary Proceso Alcala told Inquirer staff members during a recent roundtable discussion that the country is in for another record harvest this wet season if the good weather holds. Also, he said, farmers who are eager to take advantage of good commodity prices are expected to increase cultivation.

Palay production is expected to reach 7.6 million tons in the first half of the year. Sunny weather, occasionally punctuated by rain, is good for palay, Alcala said.

Asked if Philippine palay production would exceed 17.46 million tons—a 10.71-percent rise from that of 2010—Alcala said it was “possible” given the good weather.

The government is trying to reduce the volume of rice imports from almost 2.5 million tons in 2010, which included state and private purchases, to just 860,000 tons this year.

By sticking to its production and import targets, the Philippines hopes to shed its reputation of being the world’s top rice importer, Alcala said.

During the food crisis in 2008, the Philippines helped drive up global prices of grain to record levels when it imported huge volumes of rice. At the time, the country was also reeling from a decline in palay production due to extremely bad weather.

But Alcala, an engineer by profession, is confident that the country is on its way to becoming self-sufficient in rice production by 2013.

Beyond that, the country may even begin to export rice, he added.

“If we get lucky, our target rice imports of 500,000 tons next year could even be lowered,” Alcala said.

However, there was a caveat. Alcala said that such a high level of rice output would only be possible if farmers were to observe good practices.

The government has been supporting farmers with stress-tolerant seeds (drought-resistant, flood-resistant, and saline-resistant seeds), a good buying price for dry palay, and post-harvest infrastructure facilities such as dryers, Alcala said.

Alcala said that when he set the target year for rice sufficiency, many naysayers said it could not be done. However, these same people were probably surprised by the country’s record rice harvest in the first quarter, he said.

In the meantime, the Philippines can shed the image of rice importer to that of exporter of niche rice products, Alcala said.

“We are developing organic fancy rice, such as black rice, for possible export,” Alcala said. “We cannot compete in the regular rice category, but we can be competitive in specialty rice. There’s no reason why we can’t. We just have to do the work.”