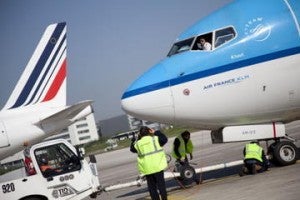 Picture shows an Air France-KLM plane on an airport tarmac. Air France-KLM announced late last year that it would stop direct flights between Manila and Amsterdam, prompting Senator Ralph G. Recto to file Senate Bill No. 3065, which seeks the removal of the common carriers tax and the gross Philippine billings. PHOTO FROM AIRFRANCEKLM-FINANCE.COM

The removal of the “burdensome” taxes imposed on foreign airlines operating in the Philippines would create thousands of new jobs and lead to as much as $78 million (P3.3 billion) in additional revenues from increased tourist arrivals.

The International Air Transportation Association (IATA) has urged the Aquino administration to scrap the common carriers tax (CCT) and the gross Philippine billings (GBP) duties currently imposed on airlines, arguing that these imposts were holding back the sector’s growth.

“Philippine authorities should recognize aviation is a key enabler of travel and tourism and contributes substantially to the Philippine economy and employment,” IATA said.

The group, which represents most of the world’s airlines, said the Philippine government should make it a priority to institute policies that support aviation by reducing the burden of taxes that affect the country’s competitiveness.

Removing the CCT and GBP fees, which are charged on top of basic plane ticket and cargo prices, would lower air travel costs by 2.5 percent—a significant amount in an industry where average profit is in the lower single digits.

The CCT and GBP taxes have been repeatedly cited as among the main reasons for many foreign airlines, particularly those from Europe, to halt direct flights to the Philippines.

The most recent was Air France/KLM, which announced late last year that it would stop direct flights between Manila and Amsterdam.

Air France/KLM’s departure prompted Senator Ralph G. Recto to file Senate Bill No. 3065, which seeks the removal of the CCT and GBP. Recto said the taxes made the Philippines an “unappealing” destination for most foreign carriers that have nine other countries in Southeast Asia to choose from.

A study by Oxford Economics showed that the Philippine air travel sector made up about 0.4 percent of the country’s gross domestic product (GDP), or a direct contribution of P35.5 billion. When taking into account the industry’s contribution to tourism, the overall revenues rose to P192.2 billion, or an impact of 2.4 percent to GDP.

The sector also directly employed 123,000 people, made up mainly of airline and airport employees and those working in the aviation supply chain. Every person employed in the aviation sector, the Oxford study showed, led to four more people getting jobs in “support industries.”

Even with its already significant contribution to domestic output, the aviation industry’s full potential has yet to be tapped due to the excessive taxes and infrastructure bottlenecks.

“The impact of taxation on aviation would most adversely impact leisure travelers given their high sensitivity to changes in price,” IATA said.

“Removing the CCT and GBP taxes would mean a potential gain of between $38 [million] and $78 million for the wider Philippine economy from increased tourism,” Iata said.

IATA said lower cargo transport costs could also give a boost to export earnings of as much as $1 billion.