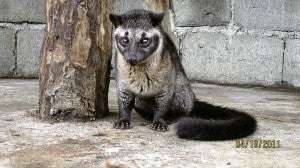 CIVETS (alamid) are cat-like creatures, with a proclivity for sweet coffee berries.

The civet was traditionally hunted as a pest, but a booming market in civet coffee has changed its fate, turning it from ‘pest’ into ‘producer’.

Civets (alamid) are cat-like nocturnal creatures, with a proclivity for sweet coffee berries. The discerning civet will choose only the ripest berries from the coffee tree, and process the pulp, but not the bean.

It takes around 20 minutes for the carnivorous creature to digest the berry and discard the bean, intact.

Gastric juices of the civet penetrate the coffee bean, leaving tiny holes, only visible under a microscope. The digestion process produces an inimitable coffee tasting experience.

Coffee aficionados can’t get enough of this rare and unique product. Selling for as much as $50 per cup in luxury markets, civet coffee is the most expensive coffee in the world.

Presently Japan, the US and Europe represent the largest markets for the luxury beverage, but demand continues to grow across the world.

Gerald Jr. works the land of his father and grandfather, spanning some 40  hectares of dense, native forest.  His mission is to preserve traditional Ifugao farming practices and introduce new ones that will protect civets and their forests.

The biggest difference is that the new generation of farmers, look to the coffee beans on the forest floor and not the berries in the tree.

Beginning in June 2007, Gerald Jr. was the first in Asipulo to harvest civet coffee, alongside his ordinary crop. While other farmers continued to throw away civet coffee, and hunt the ‘crop destroying’ creature, Gerald Jr. promotes their survival and usefulness.

“We don’t like to … follow their system of just open farming, which will cause erosion in the future … instead of cutting down the trees, we just plant coffee under them.”

Instead of collecting ordinary coffee and selling it wholesale to large companies, Asipulo farmers have tapped into the luxury civet coffee market abroad.

Gerald Jr. coordinates the sale of Asipulo civet coffee, exporting it directly to the US, Switzerland and Canada.

The origins of civet coffee have gained mythical status, and date back to Dutch colonial Indonesia in the 18th century.

So the story goes, the Dutch forbid local plantation workers from picking coffee berries for their own use.

The Indonesian workers noticed that local civets consumed the berries and discarded the bean. Keen to try the exotic brew, locals collected civet coffee beans for themselves.

Long popular in Indonesia, civet coffee only emerged in international markets after word spread about the exotic drink.

Many hands make light work, during the labor-intensive harvest season.

“In the community if you need help, they come and help. And you help them in return.” Gerald Jr. explains.

Once the civet coffee is collected, it is thoroughly washed and dried. It is then pounded in a mortar and pestle to separate the bean from the shell.

Beans are exported unroasted, while beans sold locally are roasted in a traditional charcoal and clay pot.

In November last year a quality test tasting of civet coffee was conducted in Switzerland.

Caged civets are fed large amounts of coffee, only a small part of their diet in the wild, and farmers are able to produce much larger quantities for lower prices.

The Swiss event entitled ‘Taste the Myth’ featured Philippine civet coffee from Asipulo, which was sampled by Swiss roaster of the year, Andre Strittmatter and Swiss Coffee scientist Dr. Chahan Yeretzian, among others.

While ordinary coffee has a bitter aftertaste, civet coffee is strong but smooth, its flavors linger on the tongue.

‘GoGi’ is the star of Gerald Jr.’s civet rehabilitation center.  When she was found in a hunter’s trap in February last year, she was half-starved and scared.

Now, the normally nocturnal animal spends her days wandering around her enclosure, attracting curious passersby. Gerald Jr. hopes to bring an end to all civet hunting in the community.

“If we know somebody who keeps a civet alive, we go and get them. But we don’t do it by force, of course we don’t want to break the social interaction with the community.”

Gerald Jr. often pays the hunter for injured civets and explains that preserving them is financially beneficial.

“But in our experience there are many civets who die because they are very sensitive, once they are injured it becomes worse if it is not treated and they soon will die.”

Gerald Jr. is optimistic about what the future holds. He wants to increase civet coffee production across Asipulo and promote local development.

The local community is increasingly concerned with environmental preservation. They believe the survival of the civet and fate of the community are intertwined.

“It’s about keeping the forest, and how to make profit from the resources of the forest,” says Gerald Jr.