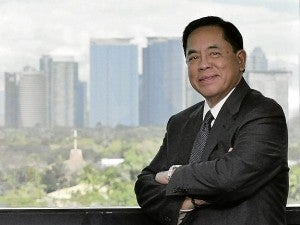 ALPHALAND president Mario Oreta believes that to succeed and last in the business of property development, one must be able to deliver what he promised and to always aim for customer satisfaction. Photo by Arnold Almacen

Ultimately, it was “that kind of fulfillment” that won Mario Oreta over.

A fulfillment that was borne out of putting roofs over people’s heads, of developing not just houses but homes and communities, and out of seeing huge smiles from the faces of satisfied homebuyers.

But it was also this fulfillment that made Oreta—currently the president of upscale developer Alphaland Corp.—decide in 2001 to completely drop his lucrative and highly successful law career in pursuit of another career in an entirely different industry: real estate development.

“The practice of law is financially rewarding but confrontational that when you wake up, you already think, who am I up against? But with property development, it’s very different. Here you find fulfillment in creating and giving to people what they can enjoy,” Oreta explained in a recent interview with the Inquirer.

He clarified though that he was not putting down the law profession—it was just that he had gotten more fulfillment in his new-found career.

According to Oreta, he has been a practicing lawyer from 1971 to 2001—and a successful one at that. He then had a large law office that serviced a number of property developers.

“I was looking at the kind of developments that they were doing and I thought may be I could contribute more. Maybe, I could give people their money’s worth,” Oreta recalled.

“I wanted to develop something that people would enjoy and something that is worth their hard-earned money. That’s why I said, if I leave the practice of law, I will reinvent myself and go to property development,” he added.

The business of building structures however was not an entirely new concept for Oreta, who was born to a family whose main business is construction.

“Our family, my uncle, owned AM Oreta Construction which built the likes of the Peninsula Hotel, Intercontinental Hotel, Urdaneta and Tuscany Apartment. We built most of the older, nicer buildings that’s why I was exposed to this kind of business,” Oreta narrated.

In fact, as early as 1985 while he was still practicing law, Oreta already began to dabble in real estate. 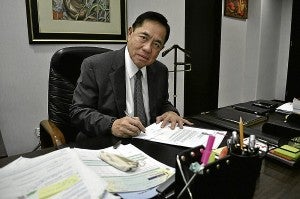 “I had this company on the side which was into small developments, but it was only in 2001 when I totally quit the practice of law and concentrated on property development,” he said.

His company then, Major Holdings, started small. But that fact did not spare Oreta from the usual challenges that any company would have to hurdle before making it big.

“I didn’t have the finances to start off as a big developer so I started by borrowing from banks and acquiring small pieces of property and building on it,” he revealed.

His first projects for Major Holdings were located in Bulacan, Silang, Carmona, Laguna and Batangas. By the time 2001 rolled in, Oreta’s company had enough projects that pushed him to finally retire from his law career.

Oreta’s biggest turning point, however, came in 2007 when businessman and former Trade Minister Roberto V. Ongpin asked him to be a part of Alphaland.

“I said, ‘Bobby I can’t make a decision right away because I have to find out who will handle my business.’ I told him my business is my life,” Oreta shared.

By some stroke of luck, Oreta’s son, who had then just graduated from the United States, returned to the Philippines in 2007. His son, Oreta added, was eager to take on his role and had shown interest to run Major Holdings.

“He wanted to do it so I said I would go ahead and help out Bobby,” noted Oreta, who then assumed his post as director and president of Alphaland two years later.

Alphaland is currently known for its selective projects that focus only on the upscale and top-of-the-line developments, which included the Alphaland Tower, Makati Place, The City Club, Alphaland Bay City, Marina Club, Balesin Island Club, Boracay Gateway Country Club, Southgate Tower and Shangri-La at the Fort.

Oreta proudly noted that Alphaland was not just a typical developer as it does not only target to put up regular structures like condominiums, but it also wants to develop “destination products” like Balesin in Quezon, which he said the company will be transforming into one of the best destinations in Asia.

Oreta admitted that he is in for a tough job as Alphaland has a number of projects in the pipeline. But he believes he will be able to live up to the challenge with the help of his team and his management skills.

“My guys have been with me for a long time and I think they know that I don’t want haphazard work. I teach them and show them what is right and good. I always ask them to focus because focus and hardwork, that’s what it is all about,” Oreta claimed.

The man further believes that in work, “intensity is everything” and that one has to put his mind, body and soul to achieve perfection.

“These I learned from Bobby. And what I’ve learned from him, I want everyone else to learn. He has affected my career, vision and work ethics,” said Oreta, who admitted looking up to Ongpin as his mentor, his teacher.

Aside from Ongpin, the lawyer-turned realtor also credited all the success he is enjoying right now to his father, Judge David Jose Oreta.

“(My father) was the one who taught me everything. He was not a builder, but he taught me to be fair in all my dealings with my fellowmen,” he said. 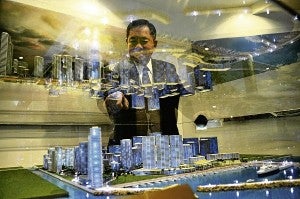 At the end of it all, Oreta is looking forward to a future in which Alphaland will not just be a profitable company, but one that will be able to make a mark, a difference, which others will look up to.

“I want Alphaland… to have that name that when you say Alphaland, they know it’s of quality, it’s world class,” he said.

“I’m not comparing with other developers, but what we want to do is develop world-class and high-end developments that people with good taste will appreciate and not because we are attached to a movie actor or whatever,” he explained.

Alphaland developments should also be able to speak for themselves, according to Oreta, such that despite the stiff and heavy competition in the real estate market, people will still appreciate and go for the “good products” that Alphaland can offer.

“To succeed and last in the business of property development one must be able to deliver what he promised and to always aim for customer satisfaction…If you look at the profit side immediately it won’t be a good project because you would cut corners. You just try to make good projects and the profit will come,” Oreta concluded.