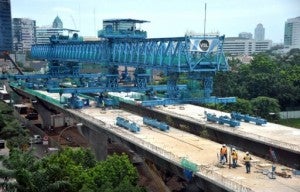 JAKARTA—Indonesia said Monday its economy grew at the fastest rate for 15 years in 2011, spurred by strong household consumption and private investment in Southeast Asia’s biggest economy.

The country, which has become a magnet for foreign money, posted a 6.5 percent rise in gross domestic product last year – the quickest pace since the 1997-98 Asian financial crisis – putting it on track to hit the government’s 6.7 percent forecast for this year.

The strong figures were led by a 4.7 percent rise in domestic demand, which accounted for around 60 percent of GDP, and an 8.8 percent surge in private investment, according to a government official.

With a population of 240 million, Indonesia has become a focus for foreign investors who ploughed $20 billion into the economy in 2011, up from $17 billion the year before.

Singapore, Japan and the United States were among top investors, tapping into the country’s growing mining and telecommunications sectors, as well as winning contracts for much-needed infrastructure developments.

The data came after Fitch ratings in December granted Indonesia an investment-grade credit rating after 14 years of junk status, followed by a similar move from Moody’s Investors Service last month.

But as some developed nations remain in the economic doldrums and others begin to make slow recoveries, Indonesia expects lower demand for its exports to slow its rapid growth to 6.43 percent in the first quarter.

“This year’s economic growth will depend on the government’s strategy to cope with the continuing global crisis,” said Central Statistics Agency spokesman Suryamin, who goes by one name.

“Indonesia may be the only country in Asia to show virtually no signs of an economic slowdown whatsoever, but this has not stopped its central bank from delivering more in the way of rate reductions than any other in the region to date,” the report said.

Meanwhile, Indonesia’s bourse was one of Asia’s best-performing markets last year, gaining 3.2 percent as many exchanges around the world contracted amid tough global economic conditions.

The market has soared around 5.0 percent so far this year.