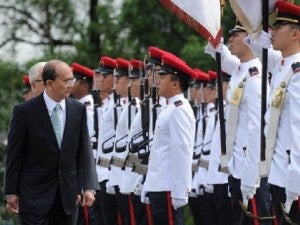 Myanmar President Thein Sein (2nd from left) followed by Singaporean counterpart Tony Tan (left) inspects the guard of honor during a welcoming ceremony at the presidential palace in Singapore on Monday, January 30, 2012. Myanmar President Thein Sein has arrived in Singapore hoping to tap the financial center's expertise as the country emerges from political and economic isolation, analysts said. AFP/ROSLAN RAHMAN

SINGAPORE—Myanmar Monday signed an agreement with Singapore seeking the financial center’s help as the country emerges from political and economic isolation after decades of military rule.

President Thein Sein arrived Sunday for a four-day state visit to the city-state accompanied by a top-level delegation, which included business leaders and top ministers in charge of economic portfolios.

Thein Sein Monday met with Prime Minister Lee Hsien Loong and the leaders witnessed the signing by their foreign ministers of an agreement under which Singapore will provide training for reforms in the legal, banking and financial sectors.

The pact also calls on Singapore to share its best practices in trade, tourism and urban planning.

With the West looking at easing sanctions and businesses closely watching sweeping democratic reforms in the formerly military-run country, Myanmar needs to prepare for an anticipated increase in investments and tourism, analysts said.

Weakened by half a century of military rule and economic mismanagement, Myanmar nevertheless has rich natural resources, including gold, gas, teak, oil, jade and gems and a large pool of low-cost labor.

The Southeast Asian state also boasts of a host of tourism attractions with its appealing colonial architecture, picturesque temples and golden beaches.

“It looks like the Burmese are in a hurry to catch up in the shortest possible time,” he told AFP.

“After so many years of isolation, their capacity to handle the expected inflow of investments and set up the much-needed regulatory frameworks have to be brought up to scratch as quickly as possible.”

A Southeast Asian diplomat also told AFP that Myanmar needs to train accountants, bankers and other people with technical skills as well as in corporate governance.

“Singapore is the logical place where it can seek help,” said the diplomat, who asked not to be named.

Singapore, a regional financial center and a favorite hub for global companies, is often seen as a model by its neighbors.

After nearly five decades of outright army rule in Myanmar, a nominally civilian government took power last year and has since surprised outside observers with its apparent scope and pace of reforms.

Thein Sein, a former prime minister and an ex-general who was a member of the junta, was appointed president in February last year after the November 2010 elections.

Myanmar and Singapore are members of the Association of Southeast Asian Nations (Asean), which also includes Brunei, Cambodia, Indonesia, Laos, Malaysia, the Philippines, Thailand and Vietnam.

Under military rule, Myanmar had long been a thorn on the side of Asean, hobbling the bloc’s relations with Western powers because of the jailing of opposition leader Aung San Suu Kyi and allegations of widespread human rights abuses.

Aekapol Chongvilaivan, an analyst with the Institute of Southeast Asian Studies, said regional economies must help Myanmar push ahead with democratic reforms.

“Singapore really needs to push Myanmar because Myanmar needs to play a more important role in Asean… The financial area is one major avenue that Singapore can contribute to,” Aekapol told AFP.

“I think now Myanmar has already set the stage for economic and political transformation.”

An orchid will be named after Thein Sein’s wife, Khin Khin Win. Thein Sein already has an orchid name after him when he visited Singapore in 2009 as prime minister.