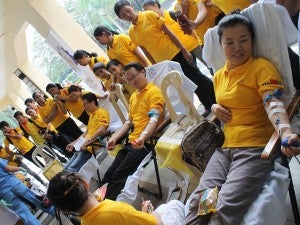 SAVING LIVES Members of the World Mission Society Church of God in Metro Manila held a blood donation campaign at the Quezon City Hall Sunday to give hope to those who are at risk of losing their life due to lack of blood and to educate the society on how important blood donation is. Bags of blood will be donated to the Philippine Red Cross-Quezon City and St. Luke's Hospital. PHOTO BY JAMIE MARIE ELONA, INQUIRER.net

MANILA, Philippines—After a series of natural disasters that struck the Philippines, members of an international religious organization show how far it would take to share one’s life —literally by donating blood.

The World Mission Society Church of God, a congregation that was first founded in Korea in 1948 by Ahn Sahng-Hong, their God the Father, conducted for the first time in the Philippines a blood donation campaign at the Quezon City hall Sunday in partnership with the Philippine Red Cross and St. Luke’s Hospital “to share the love of God the Father and help save lives.”

In the gathering attended by more than 600 possible church member donors from their branch churches in Metro Manila, Choi Jeong Maan, lead pastor of the World Mission Church of God-Philippines said that their blood campaign tagged “I Have Already Come,” is “to make Filipinos aware of the importance of blood donation in accordance with the teachings of God and to show the society that God already had come to save mankind with his blood of the Passover.”

“Blood means life. And because we want to follow the teachings of God and to save souls and lives, we helped by donating our blood,” he told INQUIRER.net, adding that he has heard that the Philippines is lacking in blood after the several calamities that hit the country.

But while 600 members have gathered as early as 10 a.m. to line up to be examined by nurses, Maan said that the group has targeted to donate at least 200 bags of blood to Philippine Red Cross-Quezon City and St. Luke’s Medical Center.

“I hope through this event, the love of God the Father and God the Mother saving precious souls through the blood of the Passover be delivered to the people who are dying from captivity of sins,” Maan said.

He said that while their church has been at the forefront in responding to this need in different parts of the world where some of their 2,200 branch churches are at, after all donating blood benefits the health, not just that of the beneficiary, but of the benefactor as well.

Dra. Gloria Lorenzo, head of the blood bank of the Philippine Red Cross-Quezon City, explained that donating blood trigger a person’s bone marrow to produce new red cells, adding that the process is comparable to that of a car’s change-oil mechanism.

But supply wise, Lorenzo admitted that the blood supply for PRC-QC is still insufficient, as January falls under the lean months—periods were only a few donates blood individually or in groups. 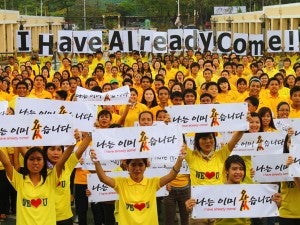 Dubbed “I Have Already Come,” the blood donation campaign by members of the World Mission Society Church of God aims to gather 200 bags of blood. PHOTO BY JAMIE MARIE ELONA, INQUIRER.NET

With this, Lorenzo extends her gratefulness to the World Mission Society Church of God for donating many bags of blood in a period where they expect to have less.

The World Mission Society Church of God “is well known in 150 countries throughout the world as a congregation that believes in God the Father and God the Mother, and faithfully keep the laws of the new covenant including the Sabbath, the Passover, the seven feasts in three times, and the regulation of veil as well.”

Apart from blood drives, their church has been organizing clean-up campaigns throughout the world, where a similar event was organized in March and December last year in Quezon City.

A fact sheet about the group said that they have recently been awarded the Presidential Volunteer Service Award by United States President Barack Obama.