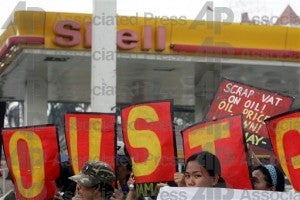 NEW OIL PRICE HIKES. Protesters display placards during their picket at a gas station of Shell in Quezon City, to protest against the soaring oil prices on July 19, 2008. Shell on Monday announced a new round of price hikes in its premium gas, diesel and kerosene products effective Tuesday. File photo by AP/Bullit Marquez

The price hikes were roughly the same as the estimates of the Department of Energy (DoE) which expected oil companies to raise prices of gasoline by 44 centavos a liter and of diesel by 60 centavos a liter.

Other oil companies, however, had yet to make their respective announcements as of Monday evening.

According to a DoE oil monitor report dated June 7, the higher price trends seen over the past weeks were due to several events including the weak US dollar over other currencies; intensifying unrest in Yemen; and continued political unrest in other oil-rich countries in the Middle East/North Africa region.

The increasing diesel and fuel oil consumption of power plants in Argentina because of dropping temperatures has also led to cuts of natural gas supplies. The Argentinian law provides that the government must cut gas deliveries to power plants first and then factories to guarantee supplies for residential and business users, which use the energy source widely for cooking and heating.

Also, as of last week, the Organization of Petroleum Exporting Countries (OPEC) failed to reach an output deal for a forecast world oil supplies, which could begin to fall short later in 2011, draining inventories just when the demand is expected to hit a seasonal peak.

A Philippine Daily Inquirer report stated that based on OPEC’s monthly report published last Friday, world demand for its oil would average 30.7 million barrels per day (bpd) in the second half of the year, much higher than the 28.97 million bpd that the 12-member group produced in May.

“The figures suggest the world will be undersupplied by 1.73 million bpd—enough to meet demand in an economy the size of France—if the organization of petroleum exporting countries does not increase supplies,” the report stated.

When global demand is higher than supply, world market prices naturally go up, thus largely affecting the Philippines, which imports most of its requirements, the DoE says.